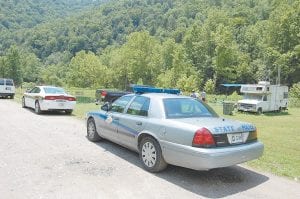 RECOVERY — Authorities gathered at a small pond near the community of UZ on Monday to try to recover the body of a man believed to have drowned accidentally while fishing. (Photo by Sally Barto)

Authorities have identified the victim of what is believed to be an accidental drowning near the community of UZ.

Letcher County Coroner Marty Baker said Chalmer Lee Watkins, 51, of Lynn Branch in Kingscreek was fishing in a small pond on Bronze Drive, located off KY 588 between UZ and Premium, when Watkins apparently fell into the water Saturday night and drowned.

Watkins had been fishing from a lawn chair when Caudill last saw him. Authorities believe Watkins, who had been drinking alcohol with Caudill, fell out of the lawn chair and into the pond. A hat belonging to Watkins was found lying at the edge of the water.

A neighbor was riding by the pond on an all-terrain vehicle when he noticed the body on Monday morning. Police were notified at 11:45 a.m., and Watkins was officially pronounced dead by Baker at 12:02 p.m.

“He must have sunk and then floated,” said Baker.

Baker used a boat to retrieve the body of Watkins.

The body was taken to Frankfort for an autopsy. Preliminary reports indicate the cause of death was drowning.