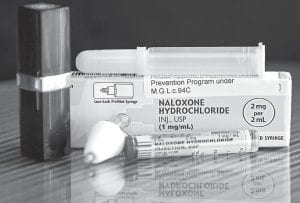 A tube of Naloxone Hydrochloride, also known as Narcan, is shown for scale next to a lipstick container. Narcan is a nasal spray used as an antidote for opiate drug overdoses. The drug counteracts the effects of heroin, OxyContin and other powerful painkillers and has been routinely used by ambulance crews and emergency rooms in the U.S. and other countries for decades. (AP Photo)

His mother ran outside, frantically assembling a pen-like canister. Her heart pounding, she dropped to her knees and used the device to deliver two squirts up her son’s nostrils.

Within minutes, his eyes opened, color returned to his face, and he sat up — brought back from a potentially lethal overdose by a drug commonly known by its old brand name, Narcan.

The drug, widely sold under its generic name, naloxone, counteracts the effects of heroin, OxyContin and other powerful painkillers and has been routinely used by ambulance crews and emergency rooms in the U.S. for decades. But in the past few years, public health officials across the nation have been distributing it free to addicts and their loved ones, as well as to some police and firefi ghters.

Such giveaways may have saved more than 10,000 lives since the first program was started in 1996 in Chicago, according to a survey by the Harm Reduction Coalition, a national group that works to reduce the consequences of drug use.

Opponents say that making the antidote so easily available is an accommodation to drug use that could make addicts less likely to seek treatment. The objections are not unlike those raised decades ago when addicts were first issued clean needles to curb the spread of AIDS. But Wohlen and his mother see things differently.

“I just didn’t want to be that mother standing next to that casket,” Linda Wohlen said.

Supporters of the distribution programs say getting naloxone into drug users’ homes saves lives that might otherwise be lost waiting for an ambulance.

“The question has always been: How can we get people treated before they die? If an overdose of the drug is taken at home, you won’t have enough time to get that patient to the emergency room before respiratory depression leads to death,” said Dr. Russell Portenoy, chairman of pain medicine at Beth Israel Medical Center in New York.

The problem has become more urgent: Heroin overdose deaths in the U.S. nearly doubled over the last decade, from 1,725 in 1999 to 3,278 in 2009, according to the Centers for Disease Control and Prevention. During the same period, deadly overdoses from opiate-like drugs, including painkillers, have nearly quadrupled, from 4,030 to 15,597.

Naloxone works by blocking certain drug receptors in the brain. It has no effect on alcohol or cocaine overdoses but can be used against such painkillers as OxyContin, Percocet and Vicodin.

Normally available only by prescription, it is issued to people like Linda Wohlen through 50 programs in more than 188 locations around the country, including Baltimore, New York and San Francisco, according to the survey, published in February by the CDC. Thousands of people have been trained to use injectable and nasal spray forms of the drug.

Other countries are also distributing the drug to the public, including Britain, Ukraine, Russia and Kazakhstan.

Most of the U.S. programs are run by state or local health departments and addiction support groups.

“If you’ve ever talked to a parent who watched their kid overdose, you wouldn’t wonder why we are doing this,” said Hilary Jacobs, deputy director of the Bureau of Substance Abuse Services in Massachusetts, where state officials began a distribution program in 2007 that they say has saved about 1,300 lives. The state has spent about $841,000 issuing free naloxone, each dose costing the Public Health Department $16.

In New Mexico, which has one of the highest drug overdose death rates in the country, health officials estimate the statewide naloxone distribution program that began in 2001 has counteracted 3,000 overdoses.

In Wilkes County, N.C., an Appalachian area with an alarmingly high rate of prescription drug deaths, a nonprofit organization called Project Lazarus has taken a slightly different approach: It persuaded doctors to prescribe naloxone in tandem with painkillers to certain patients. The practice, along with an allout education campaign, has been credited by the organization with reducing overdose deaths 69 percent between 2009 and 2011.

Fred Wells Brason II, chief executive of Project Lazarus, said he had never heard of naloxone when the group began to develop its overdose prevention plan.

“Then I found out it was used in emergency rooms to reverse opiate overdoses,” he recalled. “My first question was, ‘Well, that’s great, but not one person from Wilkes County who overdoses made it that far. They were all found at home dead.’”

William Breault, a neighborhood activist in Worcester, Mass., opposed the distribution site set up in his city.

“I just feel that the focus and our dollars should be getting people off drugs, into recovery and treatment,” he said. “This policy is one of accommodation to anti-social behavior. Absolutely, it sends a false message that this is the silver bullet, this will take care of you if you overdose.”

Police in Quincy, Mass., began carrying naloxone in late 2010, courtesy of the state, after grappling with one of the highest non-fatal overdose rates in Massachusetts. Since then, officers have used it to reverse 69 overdoses.

Pat rolman Michael Brandolini said he once saved two people in a single day: a man whose mother found him unconscious in his bedroom, and a man lying in a snowbank.

“I think it’s fine in the hands of first responders — police, fire and paramedics,” Brandolini said. “Personally, I have reservations about giving it to the addicts themselves. I think it may give them a false sense of security.”

He said he worries addicts will think they can administer naloxone to themselves, when it is almost always given by someone else — a friend or loved one — because the drug user loses consciousness.

Wohlen was out on bail for robbing a fast-food restaurant when he overdosed, and was sent back to prison because of his drug use. Now serving five to seven years behind bars in Massachusetts, the 28-year-old said in a recent prison interview that he is clean and has signed up for a prison training program to learn the heating and ventilation trade.

He said the naloxone that his mother used made it possible: “I might be dead if she hadn’t done it.”

Naloxone is one of two drugs used in the anti-addiction medicine Suboxone.