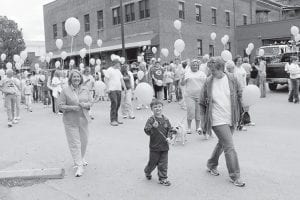 The number of child abuse referrals has greatly increased because of the drug problem in Letcher County, according to Rebecca Addington, intake supervisor for the Letcher County Division of Protection and Permanency.

At a Child Abuse Prevention Month event in downtown Whitesburg held April 21, Addington said that 95 percent of the cases received so far in 2008 involve one or more of the custodial parents abusing drugs.

Addington said of the 200 child abuse referrals received in 2008, 135 of those are cases of neglect.

“Abuse comes in many different forms,” said Addington. “Neglect cases are the predominant form of child abuse dealing with issues of a parent addicted to drugs, medical issues and environmental neglect,” said Addington.

The Letcher County Division of Protection and Permanency has dealt with 20 cases of physical abuse in 2008.

“Other types of abuse is physical. Children who have marks or bruises on critical areas of their body,” said Addington.

“Sexual abuse is the most horrendous referral for any child of any age,” said Addington.

“We have received ten cases of newborn babies being born addicted to drugs,” said Addington.

Addington said the Letcher County Division of Protection and Permanency has a team of five investigators who work diligently to provide protection to all children living in abusive situations.

The proclamation states that “every child in our great Commonwealth is a precious gift full of promise and potential. “Child abuse and neglect is a serious problem in Kentucky and across the nation.

“The prevention of child abuse is crucial to the preservation of the health and well-being of Kentucky’s families and can be accomplished by providing support and information to families as well as through increased community awareness.

“All children learn from role models at home, at church, at school and in their communities and all children benefit from the love and leadership displayed by caring and responsible adults.

“Children are our most precious resource and we are committed to keeping children of this great Commonwealth safe and happy.”

At the end of the event the crowd released blue balloons into the air in front of the Letcher County Courthouse. The color blue represents bruises that are black and then turn blue.