Drug suspect had child in car 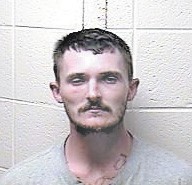 Police say a Jenkins man was handed pain pills in his car while his two-year-old child was a passenger in the front seat.

Letcher County Sheriff ’s Lt. Brian Damron said he was driving past the junction of US 23 and KY 805 in Jenkins around 7 p.m. on May 25 when he saw Betty Brock Fugate, 48, of Cram Creek, hand controlled substances to Eric Ray Jensen, 28, from outside Jensen’s car.

Damron wrote in a citation that he found the pain killer oxycodone and the anti-anxiety drug alprazolam in clear view in Jensen’s car as well as a spoon and a syringe. Damron said the child was in the front seat of the vehicle unrestrained. The car was parked on the side of the road.

The child was released to a guardian.

Damron said open containers containing alcoholic beverages were found in a van being occupied by Fugate and James Ballou, 45, of Cram Creek. Fugate and Ballou are charged with being under the influence in a public place and with possession of drug paraphernalia.

Ballou and Fugate posted surety bonds on May 25. Jensen was being held in the Letcher County Jail. Bond is set at $10,000 cash.