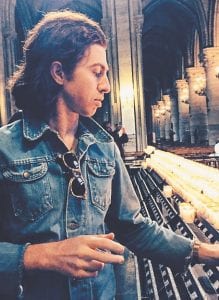 A member of the rock band that was performing live when terrorists killed 89 people at a concert hall in Paris, France last month has performed in Whitesburg three times since 2011.

Dorio’s three Whitesburg appearances were at Summit City with his full-time Julian Dorio posted this photo with his Instagram message about the deadly terrorist attacks in Paris. band, The Whigs, of Athens, Georgia between April 2011 and August 2014. He was hired as the tour drummer for Eagles of Death of Metal.

Last week, Rolling Stone magazine carried an account of what Dorio experienced during the attacks, which he called “unimaginable.” Much of the magazine’s information comes from an Instagram message Dorio posted after the attacks.

Following is the text of Dorio’s message:

“I along with my bandmates had the privilege to play to one of the most energetic crowds of our tour when, nearly half way through the show, the unimaginable occurred. Absolute and unnecessary evil turned our world on its head.

“ I am beyond grateful that I was able to find a way out of the venue, but I am mourning those who did not, including our mate, Nick Alexander. My thoughts are with their families. I’m home safe. And now I have a new family abroad. To Arthur, who ran for his life right beside me and selflessly put us in a taxi before himself, thank you. To Fabrice, a fan who lent me his phone later that night so I could call (his wife, Emily) and attempt to put her at ease, thank you.

“To everyone who, in the face of unrelenting evil, went toe to toe using courage, compassion, and love as their weapons, you all are my heroes. Last but certainly not least, the outreach and support back home is appreciated more than you’ll ever know. I will never forget it. I am forever changed but hold fast to the love around us. I’m counting down the days until I get to finish that concert. Peace and love.”

Eagles of Death Metal formed in 1998 in Palm Desert, California and were celebrating the October release of “Zipper Down” with a European tour. It’s their first album in seven years.

The Whigs, Dorio’s fulltime band, is a garage rock trio formed in 2002 that also consists of lead singer and guitarist Parker Gispert and bassist Timothy Deaux. The Whigs have released five albums, the latest being 2014’s Modern Creation.

In addition to their Whitesburg performances, The Whigs have opened concerts for bands such as Drive-By Truckers, the Black Keys and Kings of Leon. They have also performed on several late-night television shows.