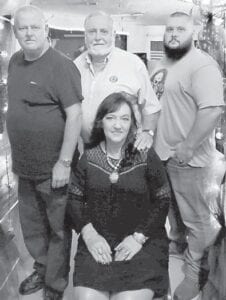 I enjoyed the storm that came through on Sunday afternoon. The wind and rain cooled the world down. I even enjoyed the thunder and the lightning. We sat on the screened-in porch during the storm and just relaxed.

One afternoon we ate at the Sazon Mexican Restaurant and as we were leaving we saw people by our car. The man said, “Sorry that we’re hiding behind your car but there’s a bear in the Dumpster that we’re watching.” There was a big bear in the dumpster. He was all the way in the Dumpster and would stand up to look around. You could see him chewing as he looked around. I did get some pictures of the Dumpster-diving bear.

We saw four deer, two big and two small ones, in our aunt’s yard one afternoon. They were munching away but were watching us drive up to my brother’s house. I got out and looked at them and they looked at me. I wanted to take a picture but my hands were full. The deer were gone when we came back out.

Ella Caudill took a drive to Fishpond Lake this past week. She enjoyed her drive. She posted on social media several photos of the flowers in bloom. The flowers were so bright and pretty in her photos. It looked like a nice flower garden to visit.

Ken and Dani Conley of Centerville, Ohio stopped by for a visit. They had been to Lake Norris, Tenn. and were on their way home. They are friends from our college days at Wright State University in Dayton, Ohio. It was a great visit. We did go to the Pine Mountain Grill and eat before they started home. Hopefully they can come visit longer the next time.

Tori and Rusty Akers of Talbot, Tenn. and their daughters, Calli and Ella, took a vacation to the southwest United States. They drove from Tennessee to Arizona. They spent a couple nights in Amarillo, Texas but the majority of their time was in Arizona. They had wanted to go to Santa Fe, New Mexico but New Mexico issued a fourteen-day quarantine order while they were there. While in Arizona the Aker family visited the Grand Canyon, Oak Creek Canyon, Sedona, Bearizona Wildlife Park, Sunset Crater, the Winslow Meteor Crater, and Wupatki National Monument. They traveled on the original Route 66 to see some of the historic Route 66 landmarks like the Cadillac Ranch, the Standing on the Corner Park, and the Wigwam Motel. They had a wonderful time visiting the southwest United States. The pictures that were posted were fantastic.

My cousin Jennifer Sigrest of Clinton, Miss. and her dog Nati took a well-deserved trip to North Carolina. Jennifer met up with some friends from Washington, DC. They did a lot of hiking and talking. It was a way to ease the feeling of cabin fever. Jennifer posted some beautiful photos. They all enjoyed the break.

Mike and I have a new great-niece. Her name is Palmer Renea Fullenkamp and she arrived on July 16, 2020. Her parents are Derek and Katie Fullenkamp of Cincinnati, Ohio. She has an older brother, James, and an older sister, Hayden. Palmer’s grandparents are Jeff and Cindy Wenning of Coldwater, Ohio and Mike and Theresa Fullenkamp of Fort Recovery, Ohio. Welcome to the family, Palmer Renea.

Services were held Thursday, July 16, 2020 in the Boggs Cemetery at Kingscreek. Condolences are sent to the family.

Debbie and Jeff Vice of Flemingsburg came in for the weekend. It was good spending time with them. We ate at Sazon Mexican Restaurant with them along with John Campbell, Gemma, Steven, and Shyanne Bentley. It was a good meal. While there I did see and say hello to Libby Honeycutt.

Michael Campbell of Newport came in for the weekend to visit his dad John Campbell and his grandpa Glen Brown. We ate breakfast at the Pine Mountain Grill with Michael and John on Saturday. It was good to see Michael. We saw David Day while we were there. It’s always good to see family when you go out and about.

We went back to the Grill on Saturday night with Debbie and Jeff Vice. We were all so hot that no one wanted to cook. It was good having a meal that was prepared for us.

Mike and I did go to the Mountain Vendors Mall over the weekend. I found a really neat table to put in the bedroom. Finding stuff is fun.

Mike and I had our first Kona Ice this past week. It was perfect on a hot day. I had wanted one for a while and I’m glad we got them. Sometimes it doesn’t take much to make you happy.

On Saturday night several of us took a trip to the scenic overlook on Pine Mountain. We watched a beautiful sunset and got some gorgeous photos. There was a slight breeze and no bugs up there. We also got to see the Comet Neowise. We had a pair of binoculars that we shared and it could be seen with the naked eye. It was fantastic. It will be approximately 7000 years before the Comet Neowise returns. Those watching the comet were: Debbie and Jeff Vice; John Campbell; Michael Campbell; Gemma Bentley and Steven, Shyanne, Kellie, Zakery, Hailey, Chase, and Duce the pup; and Mike and me.

While we were comet watching, two people stopped by. They were from WYMT and were out for a drive and hoped to see the comet. They were interesting young people. It was nice meeting Camille Gear and Dakota Makres. Sadly they left about fifteen minutes before we saw the comet. John told them all about the Little Shepherd Trail and they may be doing that trip soon.

I received my first fan letter (unsigned), which was interesting. It was brought to my attention that I made grammar mistakes in one of my columns (it’s not an article). I apologize for the grammar offense. I appreciate the mistake being brought to my attention as I sometimes proofread at one o’clock in the morning. I will admit my feelings were hurt at first but it doesn’t take much for that to happen with everything going on out in the world. I’m taking this in a positive spirit as I do appreciate the fact that The Mountain Eagle and my column are being read.

This week’s social media quote is: “Don’t wait for things to get easier, simpler, better. Life will always be complicated. Learn to be happy right now. Otherwise, you’ll run out of time.”

If you have any news or comments, please email me Cowannews@aol.com.

Thanks. Have a wonderful week and stay healthy and cool.