By CHUCK STINNETT
The Gleaner 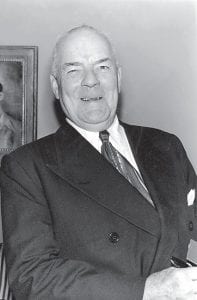 Betty Crocker wasn’t a real person. Aunt Jemima? She no more existed than Mrs. Butterworth did. They were all characters invented to promote food brands.

But Duncan Hines was a walking, breathing — and eating — person who was famous long before his name appeared on boxes of cake mixes and numerous other processed foods.

He was a Kentuckian, to boot. And years before his line of food products hit shelves, he was famed as a reviewer of the nation’s numerous and mostly independent roadside restaurants, where the quality (and safety) of the food was highly variable.

But while the Duncan Hines brand name remains well known, the real-life Hines had become largely forgotten outside of his hometown of Bowling Green, in part because the books that bore his name hadn’t been produced in decades — and it appeared that no book-length biography of him had ever been written. 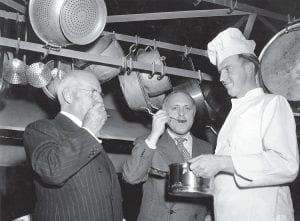 In 1992, he was preparing to go to Bowling Green to work on the final leg of his master’s degree in history at Western Kentucky University.

“I had not chosen a topic” for his master’s thesis, he recalled. “I went to the Henderson County Public Library, and on the table, on sale for 5 cents, I saw one of these Duncan Hines restaurant guides,” Hatchett said. “I saw it was published in Bowling Green — that’s where I was about to take up residence.”

Once at Western, he explored the main campus library as well as the university’s Kentucky Museum, but found no books about Hines.

This didn’t discourage Hatchett. “I wanted to do something that was different,” and Hines appeared to be virgin territory.

He proceeded to exhaust the files of the Kentucky Museum and conducted genealogical research.

He contacted Procter & Gamble, the food giant that owned the Duncan Hines cake mix brand from 1956 to 1997. “They pulled all their Duncan Hines stuff and it covered two or three tables,” Hatchett said. “I looked at it for one hour and said, ‘Xerox it.’ And they did! A few weeks later, a 40-pound box arrived in the mail.”

And he located and conducted multiple interviews with Hines’ great- niece, Cora Jane Spiller, who was the family historian. “ I couldn’t have done anything without her,” Hatchett said. “She just opened up everything. She found Duncan Hines’ secretaries and opened doors I couldn’t get into.”

“ I researched for two years intensely — every single day for two hours,” he said. “It was originally a master’s thesis. But I decided to write the book first.”

What emerged was a 750- page monstrosity. Hatchett hunted six years for a publisher. Finally, the editor at the Mercer University Press “had me throw out 400 pages.” In 2001, Mercer published his book: “Duncan Hines: The Man Behind the Cake Mix.”

It wasn’t written as a dry, academic tome but as a lively story meant for a mass audience. (While the book did sell, it didn’t sell in mass quantities, which Hatchett attributes to Mercer’s policy to not advertise or actively market its publications. Still, the printing runs of 1,500 copies each sold out.) He also shipped two copies of the full 750-page volume of the Library of Congress.

The Hines book came available in January 2002. “ This was new material,” the author said. “No one had ever done a book on Duncan Hines.”

That same year, Hatchett also published reproductions of two vintage Hines’ cookbooks — the 1955 edition of his “Adventures in Good Cooking” plus a dessert book, for which copyrights had expired — as well as “Mencken’s Americana,” which he edited from a 1920s-era magazine column produced by the famed H.L. Mencken.

“I had four books come out in eight months,” Hatchett said. “ That will never happen again.”

But what has happened is that the three Hines books are back in print, having been republished, this time in softcover and priced at $20, by the University Press of Kentucky.

The biography has been retitled “ Duncan Hines: How a Traveling Salesman Became the Most Trusted Name in Food.” All three feature forewords written by nationally known “Road Food” roadside restaurant reviewers Michael and Jane Stern.

As Hatchett learned, Hines traveled from 1905 to 1934 as a salesman of advertising paraphernalia, such as pencils bearing a company’s name. During his travels, he kept a notebook in which he recorded his countless restaurant experiences, good and bad. In 1935, he assembled a list of recommended restaurants that he shared with family and friends. It proved so popular that the next year he founded Adventures in Good Eating Inc., massproducing and updating his guidebook bearing that same name year after year. He added a hotel/ motel guide, “Lodging for a Night,” in 1939, followed by cookbooks based on recipes from approved restaurants.

When Hines was featured in the Dec. 3, 1938, edition of the Saturday Evening Post, he and “Adventures in Good Eating” became a sensation, according to Hatchett.

“He sold 2 million copies of his various guidebooks from his house in Bowling Green,” Hatchett said. “He didn’t want to be associated with a publisher. He wanted to do it all himself.”

Hines was not just a restaurant critic; he was an advocate for the dining public.

In that day, food poisoning was rampant, “particularly at roadside restaurants put up by people who owned a little piece of property by the road … most of (whom) never gave sanitation a second thought.” Hatchett said. “They sold undercooked pork chops and uncooked chicken.”

“Before he came along, more people died from restaurant food poisoning than hit-and-run accidents,” he said. “It’s was just a given that dining in restaurants was not always enjoyable; it was treacherous, sometimes. That is why Duncan Hines caught on, and caught on very quickly.”

Hines didn’t just tell the public what restaurants were safe; Hatchett said the value of being listed in the guidebooks was so enormous that he could put demands on restaurants, ranging from the quality of tableware to an insistence that they maintain clean bathrooms as far away from the dining room as practical.

He also required restaurants to agree to allow a customer to visit his kitchen to see for themselves whether it was clean and sanitary. If a reader wrote Hines with a bad report, the restaurant could lose its listing in the guidebook.

“I call them the ‘Dinner Detectives,’ ” Hatchett said.

“Duncan Hines had a reputation that he would not compromise his integrity,” and refused to accept advertising from restaurants as most other guides did eagerly, he said. “He would not sell out for money. His honor was everything.”

In 1949, media entrepreneur Roy Park persuaded Hines to put his name on a line of grocery items, though the guidebook king insisted on high quality goods.

“ In 1952, Nebraska Consolidated Mills began producing a cake mix that was sold through Hines- Park Foods,” he said. “That became their best-selling product.”

“ Eventually they had over 250 bottled, boxed and canned products,” from chili sauce and pickles to bread and ketchup, Hatchett said.

Soon, Hines was in his 70s and ready to slow down. His last guidebook appeared in 1955, and he and Park sold out to Procter & Gamble a year later. Hines died in 1959.

His name lived on, thanks to boxed cake mix. And now, largely because of Hatchett, so does his life story.