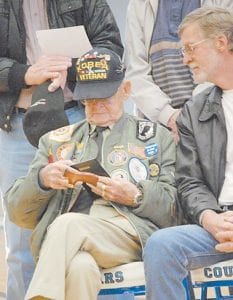 Jimmy Duncan, a former prisoner ofwar in Korea, looked at a plaque given to him during the Veterans Day program at Letcher County Central High School on Nov. 11, 2011. Duncan, who was decorated with a Silver Star, died last week.

Funeral services were held September 9 for a highly decorated veteran from Whitco who died last week at the Eastern Kentucky Veterans Center in Hazard.

James “Jim” Duncan, 82, who died September 6, was a Korean War veteran who served in the United States Army. He was a prisoner of war for more than 32 months.

Duncan was presented with the Silver Star for his “gallantry in action” on November 28, 1950.

The citation on the award says the Silver Star was presented to Private Duncan by the President of the U.S “for conspicuous gallantry and intrepidity in action against the enemy while serving with the Battery D, 15th Anti-Aircraft Artillery (Automatic Weapons) Battalion (Self Propelled), 7th Infantry Division, in action at the Chosin Reservoir, North Korea, on 28 November 1950.

“On that date, the Command Post of the 1st Platoon of Battery D was taken under heavy attack by the enemy, and the personnel at the Command Post were in grave danger of being overrun by the enemy. When the Battery Commander called for volunteers to join a patrol to go to the assistance of the Platoon Command Post, Private Duncan unhesitatingly volunteered. While crossing open ground in the attack on the enemy force, the patrol was pinned down by intense enemy fire from one of the flanks. Private Duncan, with complete disregard for his own personal safety, immediately ran toward the strong point from which the enemy was firing, and with his carbine and a hand grenade neutralized it.

“As a result of his gallant act, the patrol continued the attack on the enemy and succeeded in killing or driving off all those who remained. The personnel in the Platoon Command Post were thus rescued. Private Duncan’s outstanding display of gallantry on this occasion was in keeping with the highest traditions of military service and reflect great credit upon himself, his unit, and the United States Army.”

Duncan was on the Board of Governors of the Letcher County Veterans Memorial Museum. He was a member of the Whitesburg VFW post # 5829 and Whitesburg American Legion post # 152.

Duncan was a member of the Graham Memorial Presbyterian Church and attended the Old Regular Baptist Church.

Duncan was married to the late Fairy Mae Duncan. She died July 1, 2004.

A son of the late Verna Duncan, he is survived by his son, Buger Duncan of Whitco; and special friends, Pat Richardson of Mayking and Amanda Parker of Whitco.

The funeral was held at Everidge Funeral Home of Whitesburg. Burial was in Sandlick Cemetery.