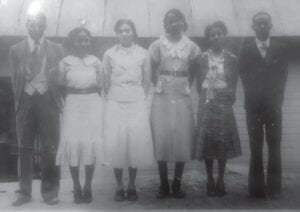 The oldest eyewitness to what was called the Letcher County Kentucky Colored School System was Mrs. Elizabeth Allen Long Caldwell. Mrs. Caldwell remembers her father being recruited by the coal company to work in the mines in Kentucky. Mrs. Caldwell and her family were relocated to McRoberts, where she was enrolled in the Tom Biggs Graded School.

Elizabeth was an above average student and learned quickly. Elizabeth attended school in McRoberts from grades 1-7. The school system did not offer high school to the colored students, therefore she could not obtain a higher education in the McRoberts-Jenkins area. In 1927, Elizabeth’s father sent her to Kentucky State Industrial College in Frankfort, to attend high school.

Elizabeth graduated high school in 1931. She completed her degree requirements and graduated from Kentucky State Industrial College by teaching during the school year and attending college during summer vacation. Elizabeth states that she read in history about Theodore Roosevelt, in his battle with tuberculosis, that he overcame by “pluck and perseverance”. She stated that “these two weapons will help a person to overcome any handicap”.

While Elizabeth was away at school acquiring the education, she could not get at home. The State of Kentucky mandated that schools could remain segregated but had to be equal. So, in an attempt to create equal schooling for the colored students a high school was established in 1931, in #4 Hollow, at the already existing Jenkins Graded School.

Elizabeth’s first teaching appointment was in Haymond. She was hired by Superintendent Boggs with the Letcher County School System (there wasn’t a school in Fleming at the time for colored students). The children and the teacher walked across the mountain to Haymond Church-School. 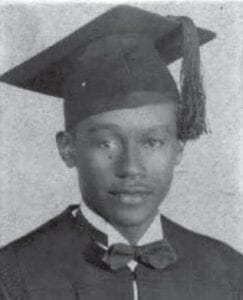 Elizabeth remembered teaching at the Dunham Graded School, which was a two-room building on the hill, in #7, with one teacher, Ms. Edmona Wilson. The one side of the building was use for the school and the other side was the church. Elizabeth would teach a half day at Dunham and then would take a cab to the Jenkins Colored High School in #4, to teach the second half of the school day. Elizabeth taught on the elementary level but knew the staff of teachers at the high school. Most of them were alumni of Kentucky State Industrial College.

Elizabeth recalls that in 1942, when the Consol Preparation Plant was built below the Dunham Graded school in #7, the students After earning a degree from Kentucky State College, William Stovall, Jr., went on to attain a degree in law from Cleveland State University-Marshall College of Law. and teachers experienced the shaking of the building from the riveting of the steel. It was very disturbing and disruptive. Mr. Snapp wanted to know why the teacher was exaggerating, until he came and felt the vibrations of the building himself. The school was closed and the students were moved to Jenkins.

Principal G.W. Parks was instrumental in getting the school enlarged and two rooms added up and down. The residents of the area at the time recall that when the students from the graded school were moved from Dunham, the newly renovated structure in Jenkins was named Dunham High School.

In 1939 Elizabeth Allen married Edward Long. Mrs. Long taught in the Jenkins Independent School System for 19 years. She was loved and admired by her students and was considered by many as one of the best.