Big tour, new album ahead for Halfway to Hazard 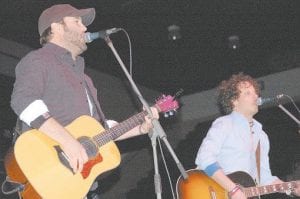 HALFWAY TO HAZARD IN PIKEVILLE – Country-rock duo Halfway to Hazard performed in concert on March 29 at the Eastern Kentucky Expo Center in Pikeville. The duo, which consists of Hindman native David Tolliver, left, and Jackson native Chad Warrix, right, are dividing their time between touring with country superstar Tim McGraw and working on their second album. They were in Pikeville to open for fellow eastern Kentucky native Loretta Lynn, and are scheduled for future stops in Cincinnati, Prestonsburg and Hazard. (Photo by Chris Anderson)

A country-rock music duo from eastern Kentucky who made a name for themselves in 2007 are seeing continued success in 2008.

Halfway to Hazard, a group consisting of Hindman native David Tolliver and Jackson native Chad Warrix, were in Pikeville on March 29 to open a concert for Loretta Lynn at the Eastern Kentucky Expo Center. On May 9, the duo will be in Tampa, Fla., to begin their second summer as opening act for Tim McGraw, whose “Live Your Voice Tour” is scheduled to stop in Cincinnati at Riverbend Music Center in Cincinnati.

Halfway to Hazard is also scheduled to return to eastern Kentucky on July 18 to headline a show at the Mountain Arts Center in Prestonsburg, but it’s a safe bet to say the event Tolliver and Warrix are looking most forward to in 2008 is their September 20 performance as the headlining act for the Black Gold Festival in their namesake town of Hazard.

Tolliver and Warrix, both 33, took the name Halfway to Hazard from a line in their song “Cold,” which says “… halfway to Hazard, with the rain comin’ down.”

Warrix is the son of former Breathitt County Judge/Executive Lewis Warrix and his wife, Grace. Tolliver is the son of Virginia Tolliver Long of Richmond and Jackie Tolliver of Hindman.

The duo’s self-titled debut album, which was co-produced by McGraw, was released August 14 by StyleSonic Records, which is partly owned by McGraw and distributed by Mercury Nashville. The album spawned two hit singles, “Daisy,” which reached No. 39 on Billboard’s country music chart, and “Devil and the Cross,” which reached No. 50.

Touring with McGraw and his wife, Faith Hill, is just one of many honors achieved by Tolliver and Warrix during the last year. The duo also got to sing the national anthem at the NFL’s National Football Conference championship game between the Green Bay Packers and New York Giants. The January 20 performance marked the second time Tolliver and Warrix were invited to sing at famed Lambeau Field. They also performed the anthem at the Packers-Washington Redskins game on October 14.

Halfway to Hazard performed at Gov. Steve Beshear’s inauguration in Frankfort in December , then returned to Kentucky for the New Year’s Eve Bash at Heritage Hall in Lexington.

Tolliver has several Letcher County connections. His sister Renee is married to former Whitesburg dentist Stephen D. Combs. Tolliver is a nephew of Sue and Ron Parks of Ermine and Don and Colette Tolliver of Dry Fork

Tolliver’s mother, Virginia Long, still remembers his first public performance. That occurred, she said, when he was five years old and singing “Away In The Manger” in church. Long said that when Tolliver was just nine years old he was invited to sing on-stage with Vince Gill in Hindman – the same year he sang at a banquet for former Kentucky Governor Martha Layne Collins.

When Tolliver was 12 he began entering and winning many singing competitions, including the Mountain Heritage Talent Show in Whitesburg.

“That was what he enjoyed,” she said. “He loved the competition.”

After graduating from June Buchanan High School and attending Hazard Community College, Tolliver transferred to the University of Kentucky in Lexington. His mother said he remained in Lexington until 1998, when he decided to move to Nashville to try to find work as a songwriter.

“He called one night and said he wanted to go to Nashville,” Long said. “At first I hated to see him go that far away, but that was his dream and I gave him my blessing.”

After signing a publishing with EMI Music as a country music songwriter, Tolliver was working with his band Dtox when he invited Warrix, whom he had known since both were teen-agers, to sit in for a night. Warrix, who had been in Nashville since enrolling at Belmont University to study music in 1993, was nearing the end of a stint in his rock band Sodium when Tolliver called.

The live work of Tolliver and Warrix soon began to catch the ears of record company professionals, including Mercury Nashville boss Luke Lewis who eventually persuaded producer Byron Gallimore and Tim McGraw to take interest. Gallimore and McGraw signed the duo to their StyleSonic label and co-produced Halfway to Hazard’s first album.

“He definitely has a good voice – even if he is mine,” Long said of Tolliver. “Chad’s got a good voice, too. They complement each other so well.”

Jackie Tolliver, David Tolliver’s father, remembers his son singing “The Devil Went Down to Georgia” by The Charlie Daniels Band as a firstgrade student at Hindman Elementary School.

“I’m very proud of him. I love him. He’s an ideal child,” said Tolliver.

Both Tolliver and Warrix are married. Tolliver is married to Barbara Roberts, whom he met through Warrix’s wife, the former Lori Duff of Hazard. Both couples have two small children.

Family members say Tolliver and Warrix continue to be very proud of their Appalachian roots, and their feelings were on display shortly after they took the Expo Center stage in Pikeville last Saturday to open for Miss Lynn, who is eastern Kentucky’s most famous musician. That the two appeared on the verge of tears as the crowd cheered loudly after their first song wouldn’t surprise Virginia Long.

“They want people to know where they’re from,” she told The Mountain Eagle in a telephone interview. “David is proud of his heritage and he loves the mountains.”

When they’re not busy touring, Tolliver and Warrix are working on the second Halfway to Hazard album.