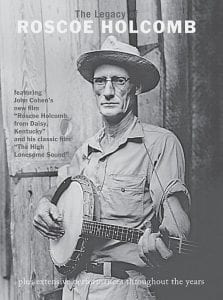 In this DVD cover image released by Shanachie, “The Legacy of Roscoe Holcomb,” is shown. (AP Photo/Shanachie)

Odds are you haven’t heard of Roscoe Holcomb. If you’re a fan of American music, though, his is most certainly a voice worth hearing.

Holcomb was the “high lonesome” singer of eastern Kentucky, a man whom performers from John Cohen to Bob Dylan to Eric Clapton (and to Jim Morrison of The Doors as well) revered as a source of spare, original mountain music and the hardship behind it. His voice, which reached almost into falsetto at times, told of work and pain and wondering — stoicism and emotion delivered by a man on a porch with his banjo and the traditions within him.

In the early 1960s, Cohen, a musician and historian, traveled to Kentucky to film a stark, black-and-white movie about Holcomb called “The High Lonesome Sound.” It helped propel the aging Holcomb into a career that took him away from manual labor and, for a time, into a world of performance where people appreciated him for his music.

Now, Cohen has taken unused footage from that session and several others to create a compelling new movie, “Roscoe Holcomb From Daisy, Kentucky.” It is the anchor of a definitive new DVD called “The Legacy of Roscoe Holcomb” that also features other rare video of performances and a copy of the original 1962 movie.

Quiet, introspective and moody, the new film reveals a man trying to make sense of his life and his music — a kind of music that Dylan referred to as “an untamed sense of control.” In long, lingering clips around Holcomb’s house, interspersed with performances, he comes across as a man lost in time, figuring himself out. In short: authenticity, the kind that any Nashville wannabe today would hand over his pickup and his hound to acquire.

Caught between two American eras, the rural one that produced him and the urban one that made him a recording artist, Roscoe Holcomb called his time on this earth “hard labor” and a “rough life.” His art, born of that life, is the real deal, one of the fundamental pieces of the American roots music mosaic. This new DVD gives his music, and the experiences behind it, their due.