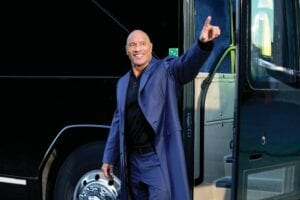 This image released by NBC shows Dwayne Johnson in “Young Rock.” The new TV show premiered earlier this week and will continue to air on Tuesdays on NBC at 8 p.m. (NBC via AP)

When Dwayne Johnson sold the idea for a TV comedy about his colorful and challenging early life to NBC a year ago, he was delighted to tell his parents that a version of their family was bound for the small screen.

Days later, his father was felled by a blood clot-caused heart attack at age 75. His loss inevitably altered “Young Rock,” said Johnson, who plays himself in the series that debuted earlier this week and will air at 8 p.m. on Tuesdays. A trio of actors portray Johnson’s younger iterations.

The series intended to include the elder Johnson’s highs and lows, but after his death his son decided to lean more fully into his “really uncanny ability to make anyone feel good.”

With a smile, he recited dad Rocky Johnson’s buoyant greetings, including a favorite: “’Have you been working out?’” 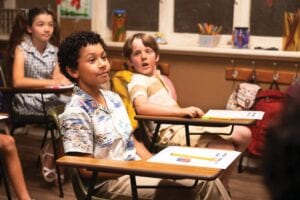 Adrian Groulx as Dwayne Johnson in a scene from “Young Rock,” now airing on Tuesdays at 8 p.m. on NBC.

Dwayne Johnson, billed in his dazzling wrestling days as The Rock, likely got a share of his skill and ambition from his Nova Scotia born father, who held National Wrestling Alliance titles and was among the first Black champions in World Wrestling Entertainment history.

But he may also owe his dad for the charm and unforced warmth that make Dwayne Johnson instantly endearing, despite his imposing build and status as a box-office star with credits in the “Fast and Furious” and “Jumanji” franchises. The sports comedy “Ballers” is part of his TV resume.

He’s the real deal, “generous and lovely,” said Nahnatchka Khan, an executive producer for “Young Rock” along with Johnson. “He’s collaborative, funny and willing to take chances. So much of comedy is trust … and I trust him completely.”

Bradley Constant, who plays the teenage Johnson yearning for girls, cool threads and a car, took on his first major role with guidance from him. 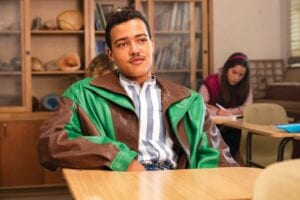 Bradley Constant as Dwayne Johnson in a scene from “Young Rock.” The new show debuted Feb. 16 and will air on Tuesdays at 8 p.m.

“He reassured me just to be myself. He’s a very genuine, normal guy who’s lived an incredible life, of course,” said Constant, who saw the family’s financial difficulties as a way to help ground him in the role.

“Young Rock” is structured around Johnson’s depiction as a 2032 presidential candidate — a less time-certain move the political independent has considered. Is he preparing America for his next chapter?

“I think the people will prepare me. I can say that,” he replied with a laugh.

In the debut episode, he’s interviewed by Randall Park, also playing himself but as an actor-turned-TV journalist. Park starred in “Fresh Off the Boat,” which Khan created and produced.

As Johnson recalls the past, there are flashbacks to scenes of him as a child, played by Adrian Groulx; a high schooler (Constant); and young adult, played by Australian actor Uli Latukefu. Joseph Lee Anderson and Stacey Leilua co-star as parents Rocky and Ata Johnson.

Matthew Willig stands tall as the late Andre the Giant, one of the wrestling world figures shown as a commonplace part of Johnson’s uncommon childhood and youth marred by setbacks he fought to overcome.

“He really wanted to go there and show the struggle, that it hasn’t been a straight line to the top for him,” Khan said. “He’s been knocked down a lot and he’s had to pivot off what he thought was his dream and find a new dream, a new path. Being able to explore those kinds of moments in a comedy are really important.”

Johnson proved “down for it all. It was just about him wanting to portray the people who affected his life in a real way,” she said, adding that what’s depicted in the series happened or was inspired by events.

In reflecting on the past, Dwayne Johnson said, he’s come to realize the challenges proved the impetus for real growth.

“It became an anchoring factor in my struggle and my determination to, quite frankly, not be a victim when, again, we were evicted (from housing) when I was 13 or 14,” he said. As he worked with Khan to find the right approach to the show, “I did know in my heart the most important thing was to be authentic and to be OK with ripping some stories open and ripping some past open.”

That includes his own missteps, which Johnson has said included arrests for fighting and theft before he was 17.

While it’s “extremely surreal” to watch his early years unfold in the series, he’s savoring the perspective that only time can bring.

Even when things were tough, Johnson said, he was bolstered by family and “had this opportunity to go and witness these real-life heroes in front of me, like my dad and these wrestlers who were adored and loved and so strong and powerful.”

“You look back on these stories and you just become so incredibly grateful,” he said.