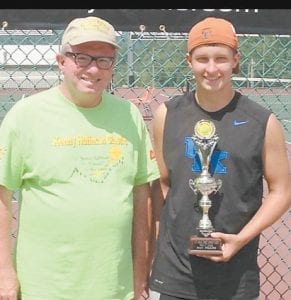 The Kenny Huffman Memorial Scholarship has been awarded to Dylan Caudill (right).

Dylan Caudill, a senior at Letcher County Central High School, is the recipient of a $3,000 scholarship from the Kenny Huffman Memorial Tennis Classic.

Caudill is a Rogers Scholar, and was one of three grand marshals in last year’s graduation ceremony. He is a member of the National Honor Society, and recently has been voted Mr. LCCHS of his senior class.

Caudill won the men’s C doubles in the KHTC, the boys’ under 18 in the Whitesburg Tennis Classic, the under 18 in the University of Virginia at Wise tournament, the under 18 and the under 16 in the Knott County Tennis Tournament. He won the overall boys’ under 16 and c doubles titles for the Appalachian Tennis Series, while placing second in both the boys’ under 18 and B singles divisions. He also won the 2016 14th Regional Doubles Championship. Caudill competed in the Kentucky High School State Tennis Tournament as a freshman, sophomore, junior, and senior.

“The Kenny Huffman Tennis Committee feels honored to be able to award their scholarships to such a deserving young man,” said Sue Huffman Stanley “Best of luck in the future.”