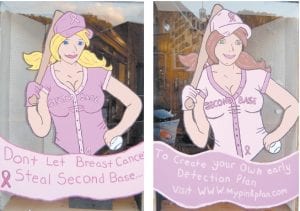 Instead of convincing people to talk about breast cancer, they find themselves courting a generation of young women who’ve never thought the subject was taboo in the first place.

“The younger generation is more positive. They are not as frightened,” Lauder observes, “and information turns into knowledge, which reduces fear and increases their willingness to deal with it.”

Lauder launched the pink ribbon campaign in 1992, giving away the subtle little reminders about breast health at Estee Lauder makeup counters in department stores. Back then, women didn’t compare notes. Now, at a recent appearance at Bloomingdale’s, Lauder and Hurley had to stand on chairs so the crowd could hear them talk about this year’s program. The message is centered on an image of a bare breast covered by the hand of a woman who pledges to spread the word “to connect, communicate and conquer.”

Hurley recalls a public appearance in Toronto when a group of young women in the midst of chemotherapy turned out wearing flashy, fun wigs.

Still, she adds, even though they’re not seeing as much shyness, there’s sometimes sadness — and that’s been the most difficult and rewarding part since she signed up as the Lauder campaign’s face in 1995, after losing her maternal grandmother to breast cancer.

Her grandmother knew she had a lump — it was so big, Hurley says — but she was too embarrassed to tell anyone about it until it was too late to do anything.

“Whenever we see a young man, you know he’s here for a mom,” Hurley says in a joint interview.

“Sometimes we cry. We’re doing this out of sincerity, and every story is personal and diff erent,” agrees Lauder, who in addition to her senior vice president duties at the family business-turnedcorporate beauty giant also serves as founder and chairwoman of the Breast Cancer Research Foundation.

Statistics, however, don’t mean much to someone who doesn’t do the proper tests, including self exams, which have been the subject of some debate over effectiveness, Hurley says.

She’s not buying it: “Only you know your breasts so well.”

And after beating the drum for so long, Hurley says she’s changed other behaviors, too.

As a model, a low-fat, healthy diet has always been important to her, she says, but when she bought a 400- acre farm in England years ago, she didn’t give a thought to what chemicals were being used on the land. Now it’s fully organic.

The other thing she’s acquired over the years is a very pink-heavy wardrobe. Pink, for anyone who hasn’t been in a store during the month of October, officially designated as breast cancer awareness month, is the ubiquitous reminder of the campaign that includes fashion, beauty, housewares, travel and sporting goods, among other product categories.

Hurley and Lauder each chose their favorite pinkshade glosses and lipsticks that are being sold in a faux croc, hot pink clutch, with proceeds benefiting the foundation.

“I have as much pink as you can have,” Hurley says. “I love to see other women in pink. It’s good for every shade of skin and hair.”

Turning to Lauder, Hurley adds: “Thank God you chose pink. Could you imagine if you chose yellow?”