E-cig use is leveling off 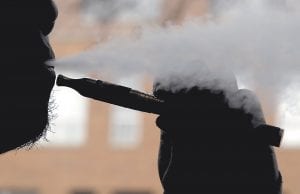 An e-cigarette is demonstrated in this photo. A new government study by the Centers for Disease Control and Prevention suggests the growing trend in U.S. adults who have tried electronic cigarettes may be leveling off. (AP Photo)

A new government study suggests the number of U.S. adults who have tried electronic cigarettes may be leveling off.

The proportion of adults who have ever used e-cigarettes rose from about 3 percent to 8 percent from 2010 to 2012. But there was no significant change last year, according to the Centers for Disease Control and Prevention study.

The study’s conclusions seem to parallel a modest decline in e-cigarette sales during the same period that have been noted in analyst reports.

The findings come from an annual survey of thousands of adults. It has been the CDC’s only source on e-cigarette trends since the devices started selling in the U.S. in late 2006.

E-cigarettes are batterypowered devices that produce an odorless vapor that typically contains nicotine, and sometimes flavorings. They are often described as a less dangerous alternative to regular cigarettes, one that may help smokers quit.

But e-cigarettes are not yet regulated by the federal government, and there hasn’t been much research on them completed yet.

“The long-term public health impact of these products is uncertain,” study’s lead author, Brian King said. But he called the leveling off in adults who have ever tried e-cigarettes “a positive note.”

The study also found the percentage of adults who are described as current ecigarette smokers — that is, they said they’d used one at least one in the previous 30 days — has been hovering at around 2 percent.

Roughly 75 percent of current e-cigarette users said they also smoked regular cigarettes — and that figure hasn’t changed much in the four years of the survey.

That finding “ raises serious questions about whether this product is really helping people quit,” said Matthew Myers, president of the Campaign for Tobacco-Free Kids.

E-cigarettes come in a range of shapes and sizes, and Myers said it’s not clear the study’s participants would have counted things like “vape pens,” ‘’ehookahs” and “tanks” as e-cigarettes.

But other research suggests most users would include them, King said.

The study was released by the medical journal, Nicotine & Tobacco Research.