E-cigs work as well as patches 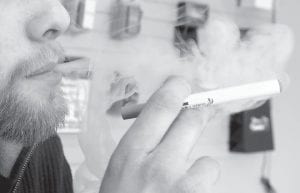 Shown above is a demonstration of the use of a electronic cigarette and its smoke-like vapor. (AP photo)

Electronic cigarettes worked just as well as nicotine patches to help smokers quit, according to the first study to compare them.

E-cigarettes are batteryoperated products that look like real cigarettes and turn nicotine into a vapor inhaled by the user. Since the devices hit the market nearly a decade ago, sales have spiked so quickly some analysts predict they will outsell traditional cigarettes within a decade. E-cigarettes are often marketed as a less harmful alternative to traditional smokes and come in flavors including cinnamon, vanilla and cherry.

“This research provides an important benchmark for e-cigarettes,” said Chris Bullen, director of the National Institute for Health Innovation at the University of Auckland in New Zealand, the study’s lead author. Until now, there has been little information about the effectiveness or safety of e-cigarettes. “We have now shown they are about as effective as a standard nicotine replacement product.”

Bullen and colleagues recruited 657 adult smokers in Auckland who wanted to quit for the study. Nearly 300 got nicotine-containing ecigarettes while roughly the same number got nicotine patches. Just over 70 people got placebo e-cigarettes without any nicotine. Each group used the e-cigarettes or patches for 13 weeks.

After six months, similar rates of smokers — 6 to 7 percent — managed to quit after using either the nicotine-containing ecigarettes or patches. Only 4 percent of smokers using the placebo e-cigarettes successfully quit.

Researchers also found similar rates of side effects in smokers that used the ecigarettes and the patches. The most common side effect in all groups was breathing problems.

The study was published by the journal Lancet and presented at a meeting of the European Respiratory Society in Barcelona, Spain. The e-cigarettes used in the study were provided free by the firm and the study was paid for by the Health Research Council of New Zealand, a government funder.

Peter Hajek, an antismoking expert at Queen Mary University of London, called it a “pioneering” study and said health officials should seriously consider recommending e-cigarettes to smokers who want to quit or cut down.

“E-cigarettes also have the potential to replace cigarettes as a consumer product, so their value is not just as a treatment,” he said. Hajek authored an accompanying commentary in the Lancet. “That could stop the tobacco-related disease and death epidemic if everyone switches to a safer way of nicotine delivery,” he said.

Hajek said that even though more studies were needed on the long-term safety of e-cigarettes, there weren’t any imminent warning signs.

“E-cigarettes may not be perfectly safe, but even if some currently unknown risk materializes, they are likely to be orders of magnitude safer than normal cigarettes,” he said.

The European Union and Britain are planning to regulate e-cigarettes as medical devices, a decision that has provoked criticism from some scientists who argue that would limit their availability to help smokers while cigarettes are not as tightly regulated. It is the tar and other toxins in cigarettes which are deadly, not the nicotine.

In the U.S., the FDA plans to assert regulatory authority over the fast-growing category in the near future. Ecigarettes could also still be regulated as drugs or drugdelivery devices, if they are “marketed for therapeutic purposes” — for example, as a stop-smoking aid.

“ There needs to be a middle ground where regulation is commensurate with the risk,” he said. “For people who are dependent on nicotine, we’ve got to provide them with a safer alternative … crushing their availability completely will be bad for public health.”