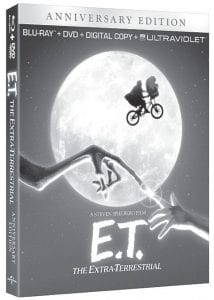 How old is too old to sob like a little girl at “E.T. — the Extra-Terrestrial”? Not 40, apparently.

The Steven Spielberg film that would become a 1980s pop-culture phenomenon came out on Blu-Ray for the first time Tuesday — 30 years, four Academy Awards and nearly $800 million after its theatrical release. To commemorate this, theaters across the country recently showed a digitally re-mastered version of the film for one night only.

Being a total geek for “ E.T.,” I jumped at the chance to see it again in a theater. And yes, I dug up my old red hoodie and bought some Reese’s Pieces for the occasion.

Having worked as a film critic for a while now — and with a child of my own — I wanted to find out whether the movie would still have the same emotional impact on me as it did when I was a kid. I wondered whether I looked back fondly at it as a piece of nostalgia, or if the film itself truly was as original, well-made and hearttugging as I remembered.

Thinking about the movies I watched repeatedly growing up — “The Wizard of Oz,” ‘’The Karate Kid,” ‘’The Breakfast Club” — it’s always “E.T.” that stirs something deeply within me. I recall experiencing an aching sense of longing when 10-year-old Elliott (Henry Thomas) says goodbye to the best friend he’d ever had — this impish, inquisitive alien from far away — knowing he’d never see him again. I wanted to see whether I’d feel that again — and I was far from alone. My theater was packed with viewers of every type. Some came in groups while others sneaked in alone in the dark; still others brought their own children to share this movie they loved.

Once the film began, I realized pretty quickly that it wasn’t a question of whether I’d cry, but rather how many times. The answer is four:

— When the spaceship takes off and E.T.’s heart light goes out at the sad realization that he’s been left behind on this strange planet. Alone. In the San Fernando Valley.

— The first time E.T. makes Elliott’s bicycle fly across the sky, with John Williams’ iconic score soaring in the background; people in my audience erupted into spontaneous applause.

— Finally, when E.T. says goodbye to everyone, waddles aboard his spaceship and flies away. Tears just streaming down my face. No shame.

Seeing “E.T.” again also made me notice things about it from a professional standpoint that I hadn’t before; like the fact that most of the film is shot from either Elliott’s or E.T.’s perspective, or from their eye level. The only adult’s face we see for about 80 minutes is that of Elliott’s mom (Dee Wallace); other grown-ups are faceless or shrouded in darkness. Elliott’s science teacher is just a torso and a voice, while Peter Coyote’s character, who eventually reveals himself to be a sympathetic, kindred spirit, for a long time is little more than jangling keys on the waistband of a pair of jeans.

Fundamentally, though, there’s a great authenticity to the kids in “E.T.” that makes it so universal, and that comes from the honesty and purity of Melissa Mathison’s script. There is zero irony here; they wholeheartedly goof on each other. They don’t have cellphones. They’re not overscheduled.

Elliott, his older brother Michael (Robert Mac- Naughton) and younger sister Gertie (Drew Barrymore, displaying impeccable comic timing at age 6) truly believe in this creature. It makes absolute sense to them that he’d show up and be their friend. Why shouldn’t he be able to cobble together a phone using a Speak and Spell, a coat hanger, a record player and a fork? This was the childlike wonder of early Spielberg. This was the optimism of the decade. Anything seemed possible.

“E.T.” similarly looks very of-its-time technically — and that includes some forgivably cheesy green screen during the flying scenes. As in Spielberg’s “Raiders of the Lost Ark,” the effects have a quaint tangibility.

Thomas himself told me recently that only now, at 41 with three kids of his own, can he finally appreciate the film’s enduring nature.