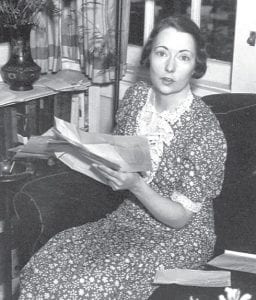 EDITOR’S NOTE: Mountain Eagle columnist Larry Caudill of Blackey had a role in the publication of author Margaret Mitchell’s 1936 novel Gone with the Wind. In this segment from a January 28, 1960, column in The Eagle about what he considered the sad state of popular movies at that time, Caudill explains his connection with Mitchell and her book. Caudill was a copyeditor and reporter at the Atlanta Journal and later joined The Courier-Journal in Louisville. Illness forced his retirement in the late 1950s and he returned to his native Letcher County. He died in 1966.

Perhaps still I am a bit blasé about movies. Many years ago I was a dramatic editor. Rarely a day that I didn’t see a picture. On weekends — movies on Sunday were against the law in Georgia then — the small-town theater operators gathered in Film Row on Luckie Street in Atlanta to select the movies for future showing. I have joined them in looking at as many as seven movies a day.

… After a while I got tired of movies. There was so little that was new. Drama in different dress was hung on the same tired old plot. I went to the market editor’s desk — where I was caught by the Wall Street crash of that Black October Friday in 1929.

Through the years thereafter I saw very few movies; a couple of air-war pictures with my wife while our son was bombardiering in Europe with the Fifteenth Air Force. A couple of years ago in Palm Beach I dropped in to escape the Florida sun and watched part of Pajama Game.

To me, Gone with the Wind is the greatest movie ever produced. That is egotistical, and it is because I had a small hand — through a few scratches of my copyreader’s pencil — in writing the book by Margaret Mitchell.

Peggy Mitchell was a cute little gal who wrote feature stories for the Sunday Magazine of The Atlanta Journal. We learned Peg was writing a book. She brought sheaves of her manuscript to the mercy of we hardboiled critics of the “universal copydesk.” We edited everything that went in the paper except ads.

We’d edit Peg’s copy, discuss it, and suggest. Sometimes we’d please her, other times she’d scream at us, in tears. But she’d take it back and type it again and show it to her father, a famous historian of the Confederacy. He basically was the source of Gone with the Wind.

I believe Peggy said she typed one chapter of Gone with the Wind 13 times. Incidentally, the book was written, constructed, from the middle of the story backward to the first chapter and forward to the history-making climax.

Little did we know we were having a hand in the top historical novel of the century. Imagine our shock that morning when we learned that the McMillan publisher had handed Peg a check for $50,000 royalties on a suitcase full of typewritten manuscript which would make a book of 1,000 pages.

When the big book was off the press, Peggy gave each of us a copy from the first printing, complete with some sassy saying and her autograph.

Then the vast excitement over making the movie. We were sure even miraculous Hollywood could never make a picture as good as the book.

The world premier ran for weeks in Atlanta — and I never saw the complete picture. I still haven’t seen it through, although it is still being shown over the world, still making money for educational trust funds Margaret Mitchell set up before she was killed by an automobile.

In the newspaper office we’d wonder what Hollywood had done with a scene we liked. We’d find out from the projection room the time that scene would be on the screen — and go see it.

Of course we were proud of the first-edition, autographed copies Peg had given us. Mine would have been a collector’s item, now, because a chapter was duplicated.

But it is gone with time and lending. Gone into my limbo of memories over a life that is all but spent. But every day of it has been interesting, exciting.