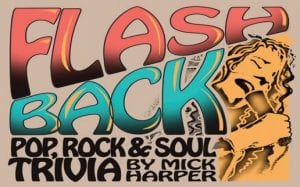 2. Dig back for this one: What year did the Kingston Trio release “Tom Dooley”? What’s the song about?

3. How many minutes long was the 1977 Meat Loaf single “Paradise by the Dashboard Light”?

5. What was the first single that the Eagles released? What was on the flip side?

6. Before Annie Lennox hooked up with David Stewart to form the Eurythmics, they were both with another band. Which band was that?

2. 1958. Dooley, a Confederate veteran, stabbed and killed his fiancee, and he was hanged for it. The old North Carolina folk song is based on a true story.

4. Peter and Gordon. The song was written by Paul Mc- Cartney, who was dating Peter’s sister at the time, and was a No. 1 hit in both America and the U.K.