Ear infection can cause dizziness 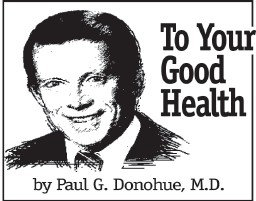 DEAR DR. DONOHUE: I got a sudden attack of dizziness that landed me in bed. I couldn’t stand. Finally, with the help of my husband, I got to the doctor, who said I had a viral infection called vestibular neuritis. I am taking medicine and am somewhat better, but the dizziness isn’t completely gone. Will it go? When? — L.T.

ANSWER: I have to warn readers that the causes of dizziness are diverse, and vestibular neuritis, while common, is only one of many causes. The vestibule of the inner ear has three fluid-filled canals that work like a carpenter’s level, that gadget whose center contains a fluidcontaining tube with a bubble in it. The balance tells the carpenter if a piece of wood is aligned. The inner ear canals tell people if they are aligned. They send signals to the brain that keep us balanced. A viral infection of those canals or of the nerve that sends signals to the brain makes people feel like they’ve been put in the spin cycle of a washer.

Not only are affected people dizzy, they become nauseated and often throw up.

Symptoms of vestibular neuritis lessen in two to three days, but full recovery can take up to six or more weeks.

A cortisone drug taken within the first three days of illness can ease symptoms. And medicines like promethazine relieve dizziness and nausea, but they make some people so drowsy that they prefer the dizziness.

The booklet on dizziness discusses vestibular neuritis as well as the other dizziness causes. Readers can obtain a copy by writing: Dr. Donohue — No. 801W, Box 536475, Orlando, FL 32853- 6475. Enclose a check or money order (no cash) for $4.75 U.S./$6 Canada with the recipient’s printed name and address. Please allow four weeks for delivery.

DEAR DR. DONOHUE: My 17-year-old son is a baseball pitcher. Last week he came home with his pitching arm greatly swollen. I was alarmed, and I told my husband we needed to take the boy to the emergency room. My husband thought I was overreacting, but I insisted. I am glad I did. He had a blood clot in a vein that caused the swelling. They treated him with medicine to dissolve the clot and put him on a blood thinner. Will he ever pitch again? — R.C.

ANSWER: I’m sure the ER doctors checked your son for things that make a person prone to form clots. He must not have had any of those conditions. He had an “effort-induced” clot, a clot caused by repetitive physical exertion. Now that the clot has been dissolved, you son should be able to resume pitching after the rest period prescribed by his doctor.

DEAR DR. DONOHUE: I drink skim milk every day for its protein and calcium. I can’t stand the taste, so I add chocolate syrup to it. Now I heard that chocolate blocks calcium absorption. Is this true? — J.D.

ANSWER: Oxalate in chocolate can interfere with calcium absorption, but the amount of oxalate added to a glass of milk doesn’t signifi cantly reduce calcium’s entry into the body.

Readers may write Dr.
Donohue or request an order