Earl Profitt is home on Cowan 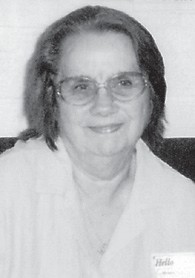 Hello everyone, I hope you are all well and happy.

It’s sure beginning to feel like fall. I don’t think I’m ready for that yet. It seems like it’s been hot, summer weather.

I don’t think we will have our pretty fall colors, it’s been so dry. I always look forward to our pretty mountains here, but we don’t have a choice and I guess that’s good.

I went to Ermine Center last Tuesday. It was good seeing everyone.

I ran into Martha Harris at Food City. She already feels like an old friend in such a short time. She said her husband (who is in Letcher Manor) was doing much bet- ter. I was so glad to hear that.

I also went to Letcher Manor, where I saw Bradley Jones, Jerry Hall and Dana Sturgill, who works there, and of course Earl and Juanita Profitt. People from away are always asking about them. Earl has gone home for two weeks to see how he gets along. I’m sure they will be glad to be home, but it’s going to be hard for them. I hope Juanita can get some rest. She’s been staying up there about 12 hours a day, and his daughter, Doris Miller, has been staying nights with him. I’m sure they are all glad to be back on Cowan. 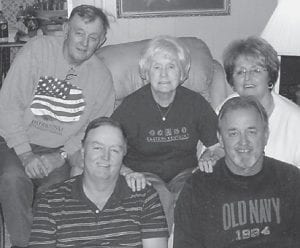 Audrey Standifer Brown of Charlestown, Ind., called and asked if Earl had a sister named Loretta. I told her he did, and that she married Gale Fields, whose dad ran a machine shop in Marlowe. Loretta died, but I think her husband is still living, though in poor health.

Audrey is the daughter of the late Theodore Standifer, and her married name is Brown. Shirley Day of Whitco is her sister. It was good talking to her. She told me to say hello to Sara and Clarence Ison.

I found out that both of them had been in the hospital. She stayed four or five days, and soon as she came home, Clarence had to go. They are both home now, and doing pretty well. They are my good friends. They have Rosa Collier staying with them and helping out. I know Rosa, and she will take good care of them.

Dorothy Tackett and her daughter, Deloris Holbrook, came for a visit on her birthday. I enjoyed their visit. I was getting ready to call her because I heard her birthday announced on the radio. I knew it was her birthday. I gave her a card in person. She saved me a phone call and a stamp. Ha! Ha!

We’ve been close friends for many years — not that we are that old. We are the same age. People used to think that we were sisters, then she got pretty.

We have just had the best revival we’ve ever had at our church with our friend, Bro. David Miller of Ohio. It had been so long since he had been here. He’s been pastor of a church in Ohio, and it’s kept him busy, but we are hoping he can get back this way soon.

It was good seeing James Fields and Linda and Charles Dixon there, as well as all of the other folks from Cram Creek Church where Bro. Ernest Brock is pastor, and where my sister, Kathleen Brock (his wife), is his helper.

My brothers, Charles, Jack and Bobby Ray Howard, and my sister, Louise Shepherd, and Bro. Caleb Howard and his family were there. It was good being all together and with the people of the Whitesburg Holiness Church. We were glad to have all of you.

I keep getting calls from people all over. I got a call from Nancy Taulbee Simpson of Maysville. She is the daughter of the late Lucy and John Taulbee. Can you Marlowe people remember Lucy, who was so pretty, and wore her pretty blonde hair in a braid around her head? Most of the family is deceased. A son, Leonard, still lives in California, and Jimmy lives in Mount Vernon.

I went to school with the late Vermell and Voris and Tommy. It was good talking to her. I remembered her as a little girl. She now has two children and some grandchildren. Time sure flies, doesn’t it? Especially when you get older — not that I am. Lizzie Mae Wright calls us ‘recycled teenagers.’ I don’t know about that.

Elzie Ray Hatton, thank you for the pictures of the Hatton reunion. I didn’t know about it until it was too late to go. Maybe you and I can make it next year. It looked like everyone was having a good time and that food looked good.

May God bless all of you, and try to be in church somewhere this week.