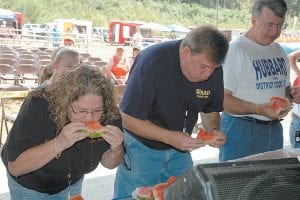 Tim Michaels, The Tams and Earl Thomas Conley will headline the Jenkins Homecoming Days Festival set for this weekend.

Michaels has played on the Grand Ole Opry and was a contestant on NBC’s “Nashville Star”. He recorded his first album, “A Night at the Top” in 2005.

The Tams with original member Charles Pope will perform at 8 p.m. on Aug. 27. The group from Atlanta, Ga. has a style of music, which has often been described as beach music, but is also a mixture of soul and R&B. In 1964, the single “What Kind of Fool” hit #9 on the Billboard charts and #6 on the R&B charts. “Hey Girl Don’t Bother Me” reached #1 in the United Kingdom in 1971. “Be Young, Be Foolish, Be Happy” sold 1 million copies, making it a platinum hit. The song reached #26 on the Top 40. “Ain’t Nothin Like Shaggin’ “ reached #6 in UK Billboard charts in 1986, but was banned because of the UK’s definition of “shag”. The Tams also sing “I’ve Been Hurt” and “Untie Me.”

Earl Thomas Conley headlines at 8 p.m. on Aug. 28. Conley had the most number one hits by any artist in the 1980s by having 18 country singles reach number one on the Billboard
Hot Country Songs Charts.

In 1981, Conley had his first top 40 hit, “Dreamin’s All I Do”. He was nominated for multiplGrammy Awards in 1983 for “Holdin’ Her and Lovin’ You.” Conley is the first artist in any genre to have four number one singles from the same album. In 2002, Conley and Blake Shelton co-wrote Shelton’s single “All Over Me”.