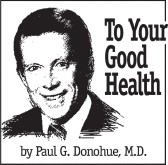 DEAR DR. DONOHUE: The thought of colon cancer makes me cringe. My father died of it. Colonoscopy wasn’t done in those days. I’m interested in learning all the ways to diagnose colon cancer in its early stages. Can you give me the rundown? — N.C.

Colonoscopy, the inspection of the colon with a telescope-like device, has greatly reduced deaths from colon cancer. Not only does this exam give doctors a comprehensive view of the colon, but it allows them to biopsy suspicious areas and suspicious polyps. Almost all colon cancers start out as polyps. A polyp looks a bit like a small plant breaking through the soil.

A simple test for colon cancer is examining a stool specimen for occult (hidden) blood. Even early cancers can cause minor bleeding. Another stool test is FIT, fecal immunochemical test, a way of detecting hidden blood by a different method. Both of these tests are done yearly.

A test that detects altered DNA — cancerous changes in colon cells — is a third test done on feces. It is constantly being fine-tuned.

CT (computed tomography) colonography, also called virtual colonoscopy because the procedure produces pictures similar to what’s seen by the naked eye in a colonoscopy, is a scan after air is pumped into the colon.

If you’re deciding which test is most appropriate for you, depend on your doctor’s judgment.