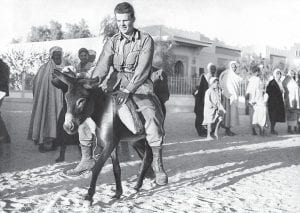 Then-solder Harry M. Caudill of Whitesburg wrote about his experiences with Arabs in North Africa in the September 21, 1944 edition of The Mountain Eagle. Above, native spectators smiled as Corp. Harold D. Ramey, of Los Angeles, Calif., crossed the finish line the winner in an impromptu donkey race held by U.S. soldiers stationed somewhere in Tunisia. (AP Photo)

Editor’s note: On September 21, 1944, about 20 years and nine months before his book “Night Comes to the Cumberlands” was published by Little Brown and Company (January 30, 1964), late Whitesburg attorney and Appalachian author Harry M. Caudill wrote one of his first published articles.

Caudill, then a private in the U.S. Army, agreed to write the article, entitled “My experiences in the Army,” at the invitation of former Mountain Eagle publishers W.P. and Martha Nolan. In it, Caudill talks about his early days in service and candidly recalls his thoughts about some of the Arab inhabitants of the North Africa territories controlled by France.

Below is the article as it appeared in The Eagle, including a note written by the Nolans:

Harry M. Caudill was born and raised in Whitesburg. He attended the Whitesburg Graded Schools and in 1941 graduated from Whitesburg High School. From September 1941 until March 1943, he attended the University of Kentucky in Lexington. In April 1943, he entered the service and on May 16 of this year was seriously wounded in action in Minturno, Italy. Harry is the son of Mr. and Mrs. Cro Caudill of Whitesburg. His story follows:

The publishers of The Mountain Eagle have asked me to write a description of my experiences in the Army and particularly of those during the time I spent in Italy.

There are many things I would like to tell which military security will not permit me to disclose. For instance, I cannot divulge the names of Units or of particular individuals. But I can mention some specific places and tell about some of the little things that occurred at them.

I have no desire to give an account (which people might consider vain and self-congratulatory) of the things I did but rather of the things I saw! Some horrible details may seem unnecessarily gruesome but they are commonplace on the battlefield. And if these articles can help just one person to better comprehend the war and cause him to give more wholehearted support to it I will consider my time in preparing them very well spent.

On April 5, 1943 I joined the American Army as a volunteer. Like most younger men I asked to be assigned to the Air Corps but was sent instead to Camp Croft, South Carolina, an Infantry Replacement Training Center. Emmett Fields and other men in letters to The Eagle have given good descriptions of Army basic training and I need not repeat it here. But for the soldiers still in the states who read The Eagle, I will suggest that they take every phase of their training seriously, and if they are Infantrymen that they learn to dig fast and deep. In my opinion an Infantry soldier should love only his wife more than his shovel!

In November I was sent to Fort Dix, New Jersey to join the Nth Regiment as a replacement. Shortly after, the regiment moved to a P.O.C. and near the first of the year left the states on a British transport bound for French North Africa.

Most of the men in Company E were from the Midwest and the Northeast and ranged in age from 18 to 40. The Company Commander was from New England and in civilian life was a highway maintenance foreman. The personnel, I believe, was perfectly representative of American manhood. Of course not all of them were perfect, but by and large I liked them better and trusted them more fully than any group I have ever been associated with. One of them, Walker Hibbitts of Dunham, was from Letcher County.

The ship on which I crossed the Atlantic is one of the largest passenger ships in the British service. Since the war it has been stripped of unessential gear and used as a troop transport. Since its speed is nearly four times that of a submarine it makes the crossing without naval escort. More than two regiments were aboard her and all day long we lined the rails gazing at the sea and sky. I enjoyed the trip greatly and fortunately did not become seasick at all.

Eight days were required for the voyage. Toward the middle of January we disembarked at a port in French Morocco. I remained in North Africa until the latter part of March and the training I received there made that in the States seem like a U.S.O. Camp show by comparison.

One could write at great length about Morocco, Tunis, and Algeria. These territories and Libya make up what used to be called Barbary. The inhabitants are called Berbers or Barbars and are devout followers of the Mahometan religion.

During the Administration of Thomas Jefferson the United States fought a war with these people, whose rulers lived by robbing American and European ships in the Mediterranean Sea. These territories are now controlled by France, except Libya, which belonged to Italy before the war, and more than half a million soldiers are required constantly to keep its warlike inhabitants in check.

These Arabs, as they are commonly called, are dark brown in color. They wear the traditional clothes of Arabs, which consist of a long robe or doublet, and for the men, loose-fitting baggy trousers which are tucked in tight just below their knees. Most of them are barefoot or wear leather slippers, the toe of which is curved to come two or three inches up from the sole.

The women are nearly all veiled, often leaving only one eye exposed. The men wear turbans wrapped around their heads of small red skullcaps that indicate that the wearer is a non- Christian. On the highways the men usually ride small donkeys while their wives walk patiently behind. Occasionally one will pass in buggy-like carriage and one man followed by as many as half a dozen wives is not uncommon.

The Arabs were a never failing source of amazement and amusement to us. Most of the men carry long keen knives beneath their robes and one would doubtless stab his brother for a pair of shoes. They are indescribably filthy and their clothes, white at the beginning, are usually slate colored.

In the country they live in “djebels,” which are a number of huts surrounded by a stone wall. At night the Arabs drive their flocks of sheep and their donkeys, chickens and camels, their wives and children inside and bar the gates. From then to morning, the only sound that usually comes from them is the mournful notes of a flute or the braying of a donkey.