Earnhardt in the dumps after trainwreck of season 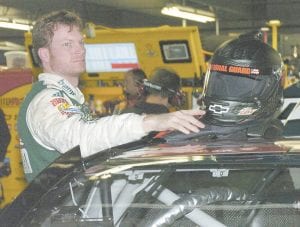 Dale Earnhardt Jr. is 24th in the NASCAR standings after finishing 29th at Martinsville. (AP)

Nobody is trying to sugarcoat the trainwreck that is Dale Earnhardt Jr.’s season.

Only nobody knows how to fix it.

And as the most prolific pairing in NASCAR history teeters on the brink of disaster, car owner Rick Hendrick is in a race to figure out what to do with his No. 88 team before Earnhardt loses what’s left of his crumbling confidence.

“I’m as frustrated as those guys are,” Hendrick said of Earnhardt’s team. “But I can tell you this … I’m as committed as I know how to be, and we’re all committed to each other. We’re just going to keep digging.”

It’s bizarre how bad things are for Earnhardt, who is stuck in a maddening slide at the same time his Hendrick Motorsports teammates hold down the top three spots in the Sprint Cup standings.

When he runs well, it’s still not good enough to compete with points leader Jimmie Johnson, Mark Martin or Jeff Gordon. And when he runs bad, it’s really, really bad. Throw in all of the bad luck and broken parts, and it’s a wonder he’s still able to show up at the race track each weekend.

Is he trying to change himself? “I don’t even know what I used to do.”

Is he second-guessing everything? “No. I’ve passed all of that. I’m over it, to be honest with you.”

How does he keep his head up? “I don’t know. We just need to run better. It’s not happening.”

He chose his words carefully, but was unable to hide the mounting frustration of a disastrous second season driving for the best organization in NASCAR. He’s won just one race since joining Hendrick Motorsports, in June of 2008, and has just five top-10 finishes all season.

Earnhardt is 24th in the standings after Martinsville and hasn’t finished higher than 17th in the past eight races.

Hendrick met with Earnhardt and interim crew chief Lance McGrew recently and reconfirmed his commitment to turning the No. 88 team around.

“I told them this can’t last. We’ve got too many smart people over there to not fix it,” Hendrick said. “It’s just so much pressure with (his teammates) running like they’re running, and you’ve got three cars that are up in the points like that. We don’t hide from it, we just know we’ve just got to work harder. It’s eating him up.

The struggles have led many to question Earnhardt’s talent level, after all, if he can’t perform in Hendrick equipment, he can’t be all that good, right?

“Everybody’s got their expectations so high, and when you don’t fulfill those expectations, people think you’re not there,” Childress said. “But Junior can still drive a race car. He can compete. He can win. And he will win a championship someday.

“It’s just a matter of going through a few of these peaks and valleys.”

Only Earnhardt is tired of all the lows, and complained that his highs aren’t even all that high anymore. He gave McGrew a resounding endorsement to stay on in 2010 a month ago, but is now disqualifying himself as capable of knowing what’s best for his race team.

“Rick has put me in a great position, but I haven’t made the most of it,” he said. “For whatever reason, we’re just not getting it done. So, I don’t know what to do.”

All he can do is keep plugging away, and look forward to the Nov. 1 race at Talladega, where he’s got an opportunity to snap out of his funk. The five-time winner at the Alabama track finished a season-high second there in April, and another strong finish can give him a much-needed boost.

Hendrick knows from experience that strong runs can cure everything for a driver, and that’s what Earnhardt must focus on.

“Every driver that I’ve had drive for me has had a period somewhere in that stretch where their confidence is shaken. That’s just normal,” Hendrick said. “But nothing will help a driver’s confidence any more than a couple of backto back runs and good finishes.