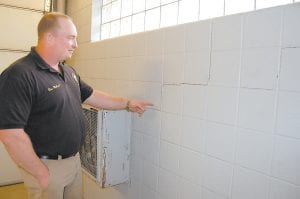 Letcher County Jailer Don McCall pointed out a large crack in a wall caused by the 4.3-magnitude earthquake on Nov. 10. The sally port of the jail received many stress cracks.

The fourth-largest earthquake recorded by instruments in Kentucky’s history occurred in Letcher County on Saturday.

The U.S. Geological Survey said an earthquake measuring a magnitude of 4.3 on the Richter scale occurred at 12:08 p.m. on November 10, with the epicenter being located about 10 miles west of Whitesburg at Mesa Drive in Blackey.

“It was just a loud, rumbling sound that kept going,” said Leigh Nichols, who lives at 188 Mesa Drive, directly above where the earthquake originated. “It shook pretty hard. We pretty much knew what it was.”

Nichols, who is a kindergarten teacher at Letcher Elementary School, said even though it seemed longer, the earthquake lasted about 10 to 15 seconds.

“It wasn’t what we were expecting for a Saturday,” said Nichols. “We were just being lazy.”

She said there is no major damage to her home despite its location.

“We had people calling to make sure we were okay,” said Nichols. 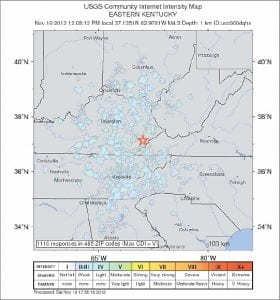 The United States Geological Survey issued this map showing the locations of people who told the USGS they felt tremors from the earthquake that was centered in Letcher County on November 10. The tremor was measured at a magnitude of 4.3 on the Richter scale.

Saturday’s earthquake was recorded around 12:08:30 at the seismic station near Stanton in Powell County and lasted about 10 minutes, Wang said.

“In terms of magnitude, it’s called a minor earthquake,” said Wang. “You can see a crack here and there. No dramatic building collapses.”

About one hour and 30 minutes later, an aftershock measured at a magnitude of 2.5 was recorded, said Wang.

“Another aftershock was recorded about three hours and 30 minutes later,” said Wang. “Other recorded shakings are mine blasts.” 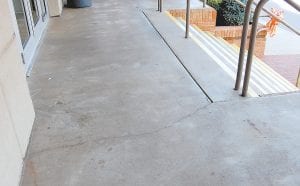 Stress cracks are located near the front entrance of the Letcher County Courthouse. The cracks are the result of an 4.3 magnitude earthquake that hit the area on Saturday. The epicenter of the tremor was located in Blackey.

Tremors during Saturday’s quake were felt by residents from Columbus, Ohio to the north and Atlanta, Georgia to the south. Residents of Nashville, Tenn., and Greensboro, N.C., also reported feeling the earth shaking.

“We just don’t think about having earthquakes here, but we do and we have,” said Letcher County Judge/Executive Jim Ward.

Wang said there have been earthquakes in Letcher County before Saturday, but he isn’t sure how many because the seismic network coverage is not sufficient to locate the earthquakes well in this area.

He said an old fault line located in the area is not active and there isn’t any way to connect this earthquake to any specific fault.

“There are many earthquakes in the New Madrid seismic zone in the far west and in southeast Kentucky, West Virginia, and eastern Tennessee,” he said. “There were several similar magnitude earthquakes which occurred in the area.”

The Letcher County Courthouse appears to have taken one of the hardest hits from the earthquake. Ward assessed damages and said the courthouse has between 150 to 200 cracks.

A structural engineer evaluated the building on Tuesday and said it was structurally sound.

“Most of the support is in the middle with metal and the concrete is pretty thick because of the jail,” said Ward. He said cracks would most likely be caulked and painted over.

The sally port, which is a secured entryway to the jail for vehicles, received the most significant damage. One of the exterior walls received many cracks in various places. Cracks are visible on the ceiling and on the concrete floor.

Some residences received damages including dry wall cracks and foundation cracks. No injuries were reported.

The Letcher County Sheriff ’s Office was busy Saturday afternoon fielding calls from people wondering what had caused their houses to shake. Sheriff ’s dispatcher Chris Perry said he had received about 30 or 40 calls from people in different parts of the county wanting to know what had happened.

“People are calling just wanting to know what was going on, if it was an earthquake or an explosion,” Perry said about an hour after the earthquake. “It shook the building here good.”

Rosie Mullins, a dispatcher at Letcher Fire and Rescue, said she received about three or four calls from people wanting to know what happened. Mullins said none of the callers reported injuries or damage.

Roland Brown, of Blackey, was working outside when he thought he heard a loud train. Then he felt the ground rumble for about 10 seconds. His wife, Ellen, suggested that maybe what they felt was an earthquake. Roland Brown then looked on the U.S. Geological Survey website to confirm a tremor had happened near his home.

Brown said the foundation of his house located on Burton Hill cracked.

Numerous Letcher County residents also took to social media sites such as Facebook to talk about their experiences.

Samantha McClain, of Jeremiah, said the earthquake was like strip mine blasting, but kept rumbling for a good 20 seconds.

“It seemed to affect one side of my house more than the other,” said McClain, whose house didn’t receive any damage.

Alana Jo Whitaker- Couch, of Blair Branch at Jeremiah, also thought it may have been a big blast from a strip mine located close to her house.

“But we’d never had one that strong,” said Whitaker- Couch. “The shaking lingered longer than it would a blast and I knew it had to be something else. I thought it was going to knock the house off the foundation.”

Brandie Back, of Elk Creek, was standing outside her house, which is located about a mile from Blackey.

“ I heard a rumbling noise and felt the ground shaking through my shoes,” said Back. “ I didn’t find it to be scary. I just exclaimed to my family, ‘We just had an earthquake.’”

Back said her house wasn’t damaged.

Opal Whitaker Jent, of Carcassonne, said her dogs started barking and acting crazy right before she heard a boom and rumbling sound.

“ (I) thought something was exploding,” said Jent. “Everything in the house was shaking. Scary.”

Mary Brewer, of Racetrack Hollow in Isom, said she thought gas lines had blown up.

Wang plans on visiting Letcher County Thursday to gather information for a report he is writing about Saturday’s earthquake.