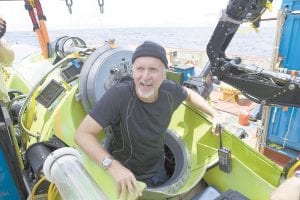 James Cameron emerged from the Deepsea Challenger submersible after his solo dive to the Mariana Trench, the deepest part of the ocean.(AP Photo/National Geographic)

The last frontier on Earth is out-of-this-world, desolate, foreboding, and moonlike, James Cameron said after diving to the deepest part of the ocean.

And he loved it.

“My feeling was one of complete isolation from all of humanity,” Cameron said earlier this week, shortly after returning from the strange cold dark place 7 miles below the western Pacific Ocean that only two men have been to. “I felt like I literally, in the space of one day, had gone to another planet and come back. It’s been a very surreal day.”

Cameron, whose imagination of alien worlds yielded the blockbuster movie “Avatar,” said there was one thing he promised to himself: He wanted to drink in how unusual it is.

He didn’t do that when he first dove to the watery grave of the Titanic, and Apollo astronauts have said they never had time to savor where they were.

“There had to be a moment where I just stopped, and took it in, and said, ‘This is where I am; I’m at the bottom of the ocean, the deepest place on Earth. What does that mean?’” Cameron told reporters during a Monday conference call after spending three hours at the bottom of the Mariana Trench, nearly 7 miles down.

“I just sat there looking out the window, looking at this barren, desolate lunar plain, appreciating,” Cameron said.

He also realized how alone he was, with that much water above him.

“It’s really the sense of isolation, more than anything, realizing how tiny you are down in this big vast black unknown and unexplored place,” Cameron said.

Cameron said he had hoped to see a strange deep sea monster like a creature that would excite the storyteller in him and seem like out of his movies, but he didn’t.

He didn’t see tracks of small primitive sea animals on the ocean floor as he did when he dove more than 5 miles deep weeks ago. All he saw were voracious shrimplike critters that weren’t bigger than an inch. In future missions, Cameron plans to bring “bait” – like chicken – to set out.

Cameron said the mission was all about exploration, science and discovery. He is the only person to dive there solo, using a sub he helped design. He is the first person to reach that depth — 35,576 feet — since it was initially explored in 1960.

Cameron spent more than three hours at the bottom, longer than the 20 minutes Don Walsh and Jacques Piccard spent in the only other visit 52 years ago. But his time there was shorter than the six hours he had hoped for and he didn’t reach the trench walls, because he was running low on power. He said he would return, as would the sub’s Australian co-designer, Ron Allum.

He spent time filming the Mariana Trench, which is about 200 miles southwest of the Pacific island of Guam. The trip down to the deepest point took two hours and 36 minutes, starting Sunday afternoon U.S. East Coast time.

His return aboard his 12- ton, lime-green sub called Deepsea Challenger was a “ faster- than- expected 70-minute ascent,” according to National Geographic, which sponsored the expedition. Cameron is a National Geographic explorerin residence.

The only thing that went wrong was the hydraulics on the system to collect rocks and critters to bring them back to land. Just as he was about to collect his first sample, a leak in the hydraulic fluid sprayed into the water and he couldn’t bring anything back.

When Cameron climbed into his sub, it was warm because it was near the equator and his cramped vehicle — his head hit one end and his feet the other — was toasty because of the heat given off by electronics. It felt “like a sauna” with temperatures of more than 100 degrees Fahrenheit, he said.

But as he plunged into the deep, the temperature outside the sub dropped to around 36 degrees, he said.

The pressure on the sub was immense — comparable to three SUVs resting on a toe. The super-strong sub shrank three inches under that pressure, Cameron said.