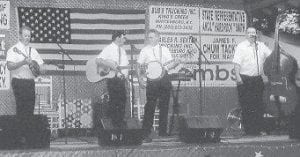 When Astor Taylor and his bluegrass band, East KY Tyme, take the stage you can’t help but feel that something special is about to happen. Whether you know them by reputation or you’ve heard them a dozen times before, you know the show will exhibit the highest level of professionalism. Their close harmony and excellent musicianship has prompted a huge following throughout the region for several years. Their popularity keeps them in demand year around. Typically they perform about 50 shows a year.

Astor recalls growing up on Craft’s Colly where he still lives today. His dad played the fiddle and his mother played a lap harp, which is a version of an accordion. Astor didn’t play an instrument but he loved to sing. Many times as a young boy he would climb up on a tree stump in the yard and sing his heart out to his imaginary audience.

When he was 17 years old he had to face the reality that there were not many jobs for a young man here in the mountains. Like many folks in the mountains he heard about good jobs north of the Ohio River. In 1964 he went to Indianapolis, Ind., and got a job doing construction work. The pay was good but he was homesick for the mountains. He got a guitar and learned a few chords.

“The first song I learned to sing and accompany myself was ‘Little Brown Jug’. I only had to learn three chords,” said Astor. “Then I learned to pick the old Carter Family standard, ‘Wildwood Flower’. I got a little better and during one lonely spell I wrote a song that I still sing a lot today called ‘Kentucky Is Calling For Me’. I used that for the title of one of the CDs we released a couple years ago. The lyrics go like this, ‘I left my old home in Kentucky for the bright lights of the city to see. The bright lights will dim when I’m leaving; Kentucky is calling for me’. That’s the way I felt in Indiana.

“In 1966 I was drafted into the Army and ended up in Vietnam in 1967. When I got out of the Army I returned to Indiana and work there a few more years for Chrysler Corporation. In the early 1970s I decided to come back home to the mountains; there were a lot more opportunities here then than when I left 10 years earlier. I worked at several different jobs from truck driver to surface coal miner to underground coal miner. I was working at Scotia in the Upper Taggart mine when the lower mine in the Imboden seam exploded in 1976. I continued working there until I was forced to retire in 1984.”

Astor recalls playing music with various groups just for the enjoyment. In the 1970s he put together a group and played at the Mountain Heritage Festival in Whitesburg. They won $50 for the first place prize and that sort of got him interested in playing some regular engagements. He continued working in the mines and playing music on weekends. He joined Steve Caudill and the Bluegrass Uprising in the 1980s and played music all over the country.

“We traveled in a van and just made our expenses. It wasn’t about money though, it was the love of music that kept us going. Playing the Ralph Stanley Festival was probably the best gig we ever had; that was quite an honor,” said Astor.

“In 1999 Buddy Young and I organized East KY Tyme. Buddy is one of the most talented musicians I’ve ever been associated with. He is both a great musician and singer. We are known for our harmony and it is Buddy who brings it all together,” said Astor. “Boyd Davis has been with us seven years and Donis Cook four years. Boyd played rockabilly music with Clyde Stanley and the Dog House Band for several years but he has made a good transition to bluegrass music. Donis played with various bluegrass bands in southwest Virginia before he joined us. Now he travels all the way from Abingdon, Va., to be a part of our band.

“These last few years have been real good for our band,” said Astor. “We play at the Hemphill Community Center twice each month and we play once a month at the Country Cabin in Norton, Va. These shows are booked a year in advance and this allows us to book a lot of other shows around this schedule.”

After playing music off and on for about 25 years, Astor says he still doesn’t consider himself a professional.

“It’s a hobby and we make enough to pay our expenses. The greatest thrill is feeling the emotions of the people we entertain; that’s worth a lot more than money.”

East KY Tyme has released several CDs and their music gets a lot of play on the regional radio stations.

“‘South of Cincinnati’ and ‘Rose of My Heart’ are among the most requested songs at our live performances and on the radio,” said Astor.

To get to the Little Shepherd Amphitheatre take U.S. Route 23/199 to Jenkins and turn at the caution light on to Rt. 3086. Go to Amphitheatre Rd and follow the gravel road. There is a $10 admission and kids age 12 and under get in free. Our venue is family oriented. No alcohol, no drugs, no pets.