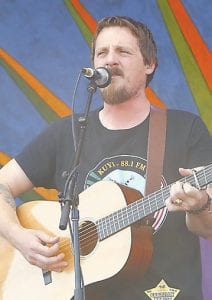 April has already been a huge month for eastern Kentuckyraised “outlaw country” musician Chris Stapleton. The month is also expected to be monumental for Sturgill Simpson, a Breathitt County-born singer-songwriter whose unique style of country music also draws high praise.

To say that Sunday, April 2, was a big day for Stapleton, the former bluegrass singer-turned country songwriter who has had a breakout year since releasing his 2015 country album “Traveller,” would be an understatement. The Johnson Central High School graduate’s day started with a feature on the influential “CBS Sunday Morning” show, which sent a crew to Paintsville to cover Stapleton’s free performance at his old high school, where he graduated as a clean-cut valedictorian, and a paid performance that quickly sold out of tickets.

“There is no stopping Chris Stapleton,” Associated Press music writer Mesfin Fekadu wrote after graduate won six of seven Academy of Country Music Awards on Sunday night, including album of the year. 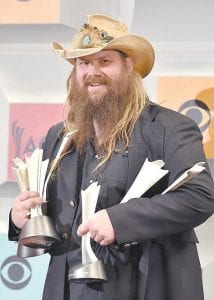 Stapleton, 37, who was born in Lexington but grew up the son of a coal miner in Staffordsville, near Paintsville, won so many awards at Sunday’s 51st edition of the ACMs that Karen Fairchild of Little Big Town, winners of vocal group of the year, told the audience: “And thank you Chris Stapleton for not being a group!”

“Thank you for being so kind to me,” Stapleton said onstage.

Stapleton also shined with an impressive performance of the song, “Fire Away.” His special guest this time wasn’t Justin Timberlake, but his wife, Morgane.

“You got to be kidding me. I thought for sure we were going to be girl-crushed on this one,” Stapleton said onstage after winning song of the year for “Nobody to Blame” and beating Little Big Town’s mega-hit “Girl Crush.”

Meanwhile, Sturgill Simpson, who has performed twice at Summit City in Whitesburg, is already receiving praise for his new album, “A Sailor’s Guide to Earth,” which is scheduled for release April 15. The album, which will be the third released by the son of a former Kentucky State Police trooper and detective who was assigned to the Hazard post for a number of years before being transferred to Woodford County, is being described as a “musical letter” to his new son.

The recording, which includes a country-style cover of Nirvana’s “In Bloom,” represents a departure from Simpson’s first two recordings — which were often described as traditional country with touches of psychedelia — and features the Dap-Tones, the backing band for soul singer Sharon Jones.

“ … It is different, that’s for sure, but it ain’t at all bad,” critic Amy McCarthy writes in the Dallas Observer. “The new Simpson sound is much more influenced by the sounds of Southern rock, though some psychedelic elements linger.”

“Trying hard not to be who anyone else thinks he is has become something of a Sturgill Simpson specialty,” writes New York Times critic Jon Caramanica. “In mid- April, he’ll release ‘A Sailor’s Guide to Earth’ (Atlantic), his arresting third album and first on a major label. The record takes the form of a song cycle from Mr. Simpson to his son — his first child — who was born just a month after Mr. Simpson released his second album, ‘Metamodern Sounds in Country Music,’ in 2014.

Caramanica adds that much of the record “takes the form of direct address. On ‘Brace for Impact (Live a Little),’ he’s a stern father telling unpleasant truths: ‘Some scream like a baby and some go out crying/ Some bid the world goodbye and welcome the dying.’ On ‘Keep It Between the Lines,’ a fun wallop of brassy soul, Mr. Simpson maps out a rulebook for his son:

Don’t get busted selling at 17

Tim McGraw’s performance featured a diverse group of people onstage, from children to adults of every race.

Sam Hunt, in an allwhite ensemble, slowed things down by playing piano while singing “Make You Miss Me.” And Stapleton was a vocal powerhouse when he performed “Fire Away.” Though he was joined by Justin Timberlake at last year’s CMAs, his wife, Morgane, sang with Stapleton during the ACMs. They kissed at the end of it.

Though country music’s top acts attended the ACMs, actors got dibs on presenting some big awards.

Kiefer Sutherland, who is working on a country album, presented female vocalist of the year. And Tom Hiddleston, the British actor who portrays Hank Williams in biopic, “I Saw the Light,” presented entertainer of the year at the end of the threehour show, which aired on CBS.