Eastwood scores with ‘The Mule’ 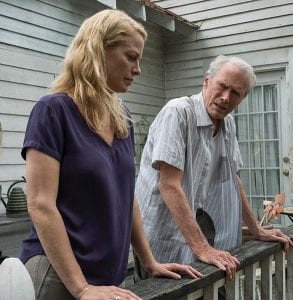 Alison Eastwood, left, and Clint Eastwood in a scene from “The Mule.” (Claire Folger/Warner Bros. Pictures via AP)

Both tender apologia and vigorous justification, Clint Eastwood’s “The Mule” is a deeply, fascinatingly personal meditation from the 88-year-old director who, like his aged drug mule protagonist, has spent a long time on the road.

“The Mule” is the indefatigable Eastwood’s second film just this year, following “The 15:17 to Paris,” a distinctly undramatic dramatization of the thwarted 2015 train attack, starring the real-life heroes. Eastwood isn’t playing himself in “The Mule” — far from it — but it’s hard not to appreciate, and be moved by, the film’s many echoes for the filmmaker, acting for the first time in one of his own since 2008’s similarly self-reflective “Gran Torino.”

That he finds such intimate dimensions in the story of Leo Sharp is a testament to both Eastwood’s knack for pared-down elegy and to the lean script by Nick Schenk that envisions larger American themes within its geriatric drug courier.

Sharp was arrested at age 87 with 104 kilos of cocaine in the back of his pickup while en route to Detroit. Little in the World War II veteran’s appearance suggested his secret identity. Sharp, it was discovered, was among the most prolific regional smugglers for the Sinoloa cartel. The hard-tobelieve tale was recounted by The New York Times’ Sam Dolnick, an article that’s been adapted here.

“The Mule” takes plenty of liberties with Sharp’s story — Eastwood’s smuggler is named Earl Stone, and is a Korean War vet — just as it has found curious parallels for its star. Some of them are silly. Some are profound. But rarely does “The Mule” — for better and worse — not reverberate with Eastwood’s own mythology in intriguing, if sometimes painfully awkward ways.

Eastwood’s Stone is a celebrated horticulturalist whose specialty is the daylily, a fragile flower that blooms for 24 hours a year. In the film’s early scenes, we see him, dressed in a seersucker suit, dishing out jokes while being fawned over by fans. Eastwood has made celebrity a regular subject, (the Capt. Chesley Sullenberger of his “Sully” resented the spotlight). But the director has found his most peculiar metaphor for his own fame in a horticulturalist who wins at the daylily equivalent of the Oscars.

But Stone’s lily farm runs into hard times. Dolling out cash to his Hispanic workers, he mutters, “Damned internet. It ruins everything.”

Like “Gran Torino” (also penned by Schenk) there are plenty of such old-man lines in “The Mule,” some delightful, some less so. We learn that Stone has long been estranged from his bitter ex-wife Mary (Dianne Wiest) and his equally furious daughter Iris (Alison Eastwood, the director’s daughter), though his granddaughter Ginny (Taissa Farmiga) has kept the faith.

To help pay for Ginny’s wedding, Stone follows a tip that leads him to a nondescript auto shop. Cartel members put a bag of drugs in his beat-up Ford pickup, hand him a phone and tell him to respond to any call or text. “Text?” he replies. After reaching his destination, Stone finds a wad of cash in the glove compartment.

Many more trips and more kilos follow, and the legend of the smuggler known as “Tata” (grandpa) begins to grow, attracting the attention of the cartel kingpin (Andy Garcia). At the same time, a DEA investigation (Bradley Cooper and Michael Pena co-star as agents) is closing in. But they, too, aren’t immune to the superficial ways of the modern world, and are pressed to make “a splash” for politicians and press.

Baked into “The Mule” is a sense of changing America squeezing out the regular Joe. Stone has occasional encounters — giving a repair suggestion to a lesbian biker, fixing a tire for a couple he refers to as “Negroes” — that seem intended to show he’s a good ol’ guy, even if he doesn’t know the politically correct lingo. “The Mule” isn’t unconcerned with racism, but these scenes are really just for a laugh. Worse, I found, was scene that parodied the anxiety of a Latino man wrongly pulled over by the police.

A film about an old white guy working for a Mexican cartel called for more curiosity to those around Stone. There isn’t a Hispanic character (or woman) in “The Mule” that rises above a stereotype, an irony considering Stone’s success is predicated on not looking like a typical smuggler.

And yet there’s still a potent, classically Eastwood parable here about eking out a little bit of freedom in an America that seems to always be tightening the noose. Even the low-level cartel guys get a new, unforgiving boss.

And as “The Mule” ambles toward its conclusion, it draws closer to Stone, and maybe to Eastwood’s legacy, too. Much of the movie measures temporary pleasures (from a motel threesome to the fleeting bloom of a lily) with long-term guilt. When Stone makes a reckoning with his ex-wife and daughter (Eastwood’s late scenes with Wiest are the best in the film), it’s hard not to wonder if Eastwood (whose expansive family attended the film’s premiere) is channeling his own misgivings over a nonstop career. “I thought it was more important to be somebody out there,” he says, “than a damned failure in my own home.”

“The Mule,” a Warner Bros. release, is rated R for language throughout and brief sexuality/nudity. Running time: 116 minutes. Three stars out of four.