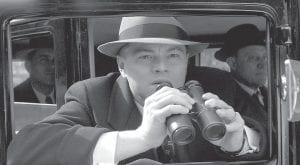 Though Hoover was exceptionally popular with the American public throughout his nearly four decade reign as FBI director, his opponents — the gangsters, the radicals, the Kennedys — have always been the chosen subjects of movies. Movie Review

“J. Edgar,” too, may not draw cheers, but it remains a riveting, noble attempt by Eastwood, now 81, to wrestle with big American questions, many of which have obvious relevance to today’s politics. It’s another largely fascinating, if disappointingly flawed chapter in Eastwood’s fantastic late period.

“J. Edgar” is a biopic framed around Hoover ( a thoroughly committed, engaging but ultimately still removed Leonardo DiCaprio) dictating his life story to various typists. This is Hoover’s story, mainly told through his perspective — and therefore a somewhat claustrophobic view of history.

The film, from an ambitious script by Dustin Lance Black (who wrote the Harvey Milk biopic, “Milk”), opens with a lot of switches in time as the narrative rushes to pack in the rise of Hoover as a Justice Department upstart and eager riser at the nascent Bureau of Investigation. It’s a grimly propulsive first hour, pushed forward by the relentless, paranoid patter of the fast-talking Hoover (nicknamed “Speed”).

Hoover is fully formed from the start: A meticulous, obsessive defender of America (or what he conceives as America). He tries to make typist Helen Gandy (the wonderful Naomi Watts, here underused, looking too bright for a somber tale) his wife, but when she declines, he makes her his lifelong, trusted secretary instead.

“Edgar, can you keep a secret?” Gandy, explaining her career goals, asks — and somewhere, five decades of American politicians chortle.

Eastwood makes an effort to show the post-World War I political climate by which Hoover was formed — the bombings and assassination attempts that would ignite his long “war against the Bolsheviks.” The point, perhaps, is that the threat was not just paranoia — but was still far from the “end of times” warnings that echoed, not unlike they have in contemporary times.

Hoover will continue this fight throughout, eventually mistaking other movements ( such as the civil rights movement — Hoover, a racist, would call Martin Luther King Jr. “the most notorious liar in the country”) for extensions of communism. Whereas many biopics chart a person’s arc across history, “J. Edgar” follows history’s arc across Hoover’s bullheaded steadiness.

Eastwood explores Hoover’s increasing megalomania, his illegal surveillance, his secret files. By the time Nixon is elected president, Hoover ironically recognizes him as a “menace” who will do anything to keep power. But Eastwood also reminds us of Hoover’s accomplishments.

Hoover built a centralized collection of fingerprints in Washington, and was an early advocate of forensics. He brought professionalism to FBI agents, but also presided over them like a dictator, insisting they shave any facial hair and wear suits to his liking (Hoover, almost dandyish, kept to his Brooks Brothers). He was an early publicity innovator, creating a mythologized “G-Man” — not to mention an exaggerated Hoover.

Still, the most affecting parts of “J. Edgar” are Hoover’s two most important personal relationships: That with his mother (Judi Dench) and with his No. 2 and close friend Clyde Tolson (Armie Hammer, who after being digitally doubled for “The Social Network” has been restored to a singular being).

Hoover was an emphatic mama’s boy, and Dench plays her as a kind of Lady Macbeth, fostering her son’s repression. When a grown Hoover gets worked up and begins stuttering, we’re cast back into the “The King’s Speech”: She tells him, like she did when he was a child, to talk to himself in the mirror and “Be my little Speedy.”

The exact nature of Hoover’s relationship with Tolson isn’t known. They ate together nearly every day and took vacations together, but the gay and cross-dressing rumors about Hoover aren’t established.

In “J. Edgar,” the relationship is entirely convincing. Hoover and Tolson (Hammer plays him as totally subservient to Hoover) are inseparable partners, but their sexual desires — while not spelled out — appear to be unsatisfied. Black’s interest in Hoover’s story is that of a closeted gay man, as opposed to the outed Milk. DiCaprio and Hammer have an excellent chemistry, full of slight, homoerotic gestures.

It can and surely will be argued how accurate it is to portray Hoover this way. The politics of the film will also be debated, given that Eastwood, a moderate libertarian Republican, is sympathetic to Hoover (felt most in his loving, mediocre piano score).

But just as the director so caringly switched sides of a World War II battlefield for “Letters from Iwo Jima” after “Flags of Our Fathers,” Eastwood’s “J. Edgar” shows just as much empathy for the power broker as “Changeling” did for the aggrieved.

In “J. Edgar,” Eastwood and cinematographer Tom Stern fill the interiors with deep shadows and desaturated colors. That adds to the weighty feel of a biopic, which remains — when conventional — a problematic form for movies: not enough time to fit a life, and too much material to find a narrative. “J. Edgar” struggles to put forth a full picture of Hoover, a failure Black’s screenplay attempts to shroud in the contrived flashbacks.

DiCaprio has no hesitation about the biopic, and he does a great deal to make “J. Edgar” a compelling one. Thanks to Deborah Hopper’s excellent costumes, he plays the character across decades (as Hammer and Watts do as well). He’s most striking, almost Orson Welles-ish, as the elderly Hoover.

And, really, it’s the experience of aging — a subject of many of Eastwood’s recent films — that comes across best with “J. Edgar.” The resonating images of Hoover are of a man increasingly and tragically out of step with time. Thankfully, it’s been quite the opposite for Eastwood.