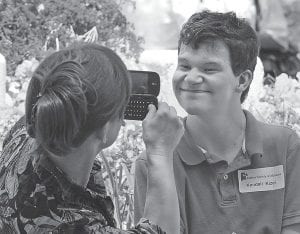 Debbie Kizer, left, of Huntsville, Ala., took a photo of her autistic son Kendall, 17, after the rally for people with Autism Spectrum Disorders recently, at the Alabama State House in Montgomery, Ala. (AP Photo/Montgomery Advertiser)

A simple checklist that parents fill out in the waiting room may help doctors someday screen for warning signs of autism as early as a baby’s first birthday.

San Diego pediatricians tested the tool with more than 10,000 babies at their 1-year checkups, looking for such things as how the tots babble, gesture and interact with others.

The research is a first step in the quest for earlier autism screening. It’s not ready for routine use, as more work is needed to verify its accuracy. But it also may prove valuable in finding more at-risk babies to study what causes the developmental disorder.

“There are subtle signs of autism at one year if you just look for them,” said neuroscientist Karen Pierce of the University of California, San Diego, who led the study. “Let’s just get these kids detected early and treated early.”

Recent data suggest about 1 in 100 U.S. children has some form of autism, which ranges from mild to severe problems with behavior, communication and socialization. The American Academy of Pediatrics already urges autism screening during regular doctor visits at ages 18 months and 24 months. Yet a 2009 study found that on average, children aren’t diagnosed until they’re 5.

Experts say early therapy can lessen autism’s severity, even if they don’t know exactly what types will prove best. “The earlier you start, the better,” said Dr. Lisa Gilotty of the National Institute of Mental Health, which helped fund the study.

Hence the interest in younger screening.

“ This is very exciting work, to think we may be able to identify children with autism this early,” said Dr. Susan Hyman of the University of Rochester and a pediatrics academy autism specialist, who wasn’t involved in the new study.

But, she cautioned, it’s not clear how best to do that: “I don’t think screening for autism at 12 months is ready for prime time.”

Thursday’s study uses a 24-question checklist written in easy-to-understand terms that parents can answer in about five minutes. It was developed a few years ago to detect broader signs of language or developmental delays. Pierce signed up 137 pediatricians to use the questionnaire during every 1-year checkup and refer babies who failed for further testing. Those youngsters were re-evaluated every six months to age 3, when a diagnosis could be certain.

Of 10,479 babies screened, 184 who were sent for further testing followed through — and 32 eventually were diagnosed with autism, Pierce reported April 28 in the Journal of Pediatrics.

That’s consistent with expected rates of detection that young; Rochester’s Hyman said some forms of autism don’t become apparent until age 2 or even later.

Numerous other children were diagnosed with language delay or some other developmental problems, so that in the end, the screening accurately predicted some problem in 75 percent of those kids, Pierce calculated. But there were false alarms for 1 in 4, who had no problems.

The children began treatment at around 19 months. In addition, Pierce’s program does MRI scans and other tests as part of broader research into autism’s biological underpinnings, studies now limited by the few numbers of babies being identified as at risk when they’re so young.

One big puzzle: Only a fraction of the total 1,318 babies who failed the initial screening were referred for follow-up. The study couldn’t tell how much of that gap was recording error, or if doctors or parents weren’t worried enough to follow up right away, or if families went elsewhere.

Still, the study shows early screening is feasible in the hectic everyday offices of regular pediatricians.

For now, what should worry parents? Pierce’s top concerns:

— Lack of what she calls “shared attention.” Around age 1, babies should try to “pull your attention into their world,” pointing to a bird and watching to see if you look, for example, or bringing you a toy, she said.

— Lack of shared enjoyment, where a baby may smile at mom but not engage if other people try peek-a-boo.

— Repetitive behaviors like spinning a car wheel rather than playing with the toy.

Language delays are worrisome if they accompany other problem signs, she said.