BY JIM ROMANOFF For The Associated Press 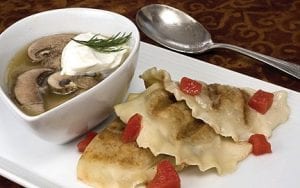 There are plenty of ways to add a homemade touch that can transform purchased items into real — and really satisfying — meals.

This recipe for mushroom soup with pelmeni (Russian dumplings) uses off-the-shelf products to transform a few cans of broth into a light and comforting soup.

Pelmeni are crescent shaped dumplings that are the smaller, lighter cousins of the pierogi. And though these are filled with a potato and onion mixture, they often also contain cheese, minced meats or mushrooms.

Rather than blending and rolling out pasta dough, this recipe uses wonton wrappers to make the pelmeni. Look for them in the produce section at the grocer, usually alongside the Asian noodles and water-packed tofu.

To give the broth added character, it is simmered with onion and bay leaf, though it’s the chopped fresh dill and dollop of sour cream that really finishes the dish with style.

Serve with a chopped salad and some crunchy whole-grain rolls to make it a meal.

Cut the onion in half lengthwise through the stem. Finely chop half of the onion and set aside.

In a large pot over mediumhigh, combine the remaining onion half with the broth, bay leaf and water. Bring to a boil, then reduce heat to low. Partially cover the pot and simmer for 30 minutes.

Meanwhile, in a small nonstick skillet over medium, heat the olive oil. Add the chopped onion and saute until very well browned, about 10 minutes. Add the potatoes and cook until tender, about 8 minutes.

Stir in the milk and simmer until most of the liquid is absorbed, about 1 minute longer.

Transfer the potato mixture to a bowl. With a fork, mash the mixture to a chunky puree. Season with salt and pepper.

Divide the wonton wrappers into stacks of 4. With a 3-inch round biscuit cutter, cut each stack into circles. Place a heaping teaspoon of the potato mixture in the center of each circle. Moisten the edges of the circles with water, then fold them in half over the filling, pressing the edges together to seal.

In a nonstick skillet or grill pan over medium, heat the canola oil. Sear the dumplings for about 1 minute on each side. Set aside.

Remove the onion and bay leaf from the simmering broth. Add the mushrooms and dumplings. Increase heat to medium and simmer the dumplings until they are floating and tender, 3 to 4 minutes.

To serve, divide the dumplings and soup between 4 bowls, add a dollop of sour cream and sprinkle with dill.