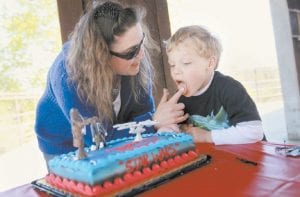 Sandy Wilson gave her son, Christopher, 5, a taste of his birthday cake’s frosting before a party in Columbia, Md., in April. After caesarian section surgery to deliver him, she developed necrotizing fasciitis, a flesh eating infection, and was in hospitals for years, unable to care for him. Finally healthy, Wilson threw her son his first birthday party planned by his mother. (AP Photo)

Waking from a fog of anesthesia, Sandy Wilson found she was a patient in one of the hospitals where she worked as a nurse. She remembered having a baby, and being told she had gotten an infection. But nothing could prepare her for what lurked beneath the sheets.

Flesh-eating bacteria were eating her alive.

“When I looked down at my belly, basically all the skin was gone and I could see my internal organs,” she said. “I remember seeing my intestines. I thought, ‘There’s no way I can live like this … This is a death sentence.’”

In all of medicine, few infections are as feared as this one. It strikes out of the blue, especially obese people, diabetics, cancer patients, transplant recipients and others with weak immune systems — a growing group of Americans. It kills 20 percent of its victims and horribly disfigures others.

It used to be caused almost exclusively by one type of strep bacteria. Now there’s a scary trend: drugresistant superbugs like the staph germ MRSA increasingly are able to make “flesh-eating” toxins and cause nightmarish infections like Wilson’s.

To treat it, doctors cut away dead tissue, but the infection often advances after they think they’ve gotten it all.

Inch by inch, it devoured the 34-year-old Wilson. Spleen, gall bladder, appendix. Part of her stomach and ultimately, all of her intestines.

Over five years, she had countless surgeries, including an unusual organ transplant. For much of that time, she lived in hospitals and rehabilitation centers, fed by tubes and unable to give her young son a bath, to read him a bedtime story, to tuck him in at night. She lost her marriage and endured unimaginable pain.

“It was like I was rotting from the inside out,” she said.

“It was like something out of a very strange science fiction movie,” said her mother, Dottie Howarth of Columbia, Md., also a nurse. “I was very afraid that she would not make it through this.”

No one knows how Wilson got necrotizing fasciitis, (fash-ee-EYE-tis), the infection’s formal name. The ordeal began after her son, Christopher, was born by cesarean section on April 1, 2005. She developed a clotting problem and was given blood components pooled from hundreds of donors.

After several weeks, she went home but lasted only two days. Fluid built up around her C-section and her blood pressure plunged. She sought emergency care at an Annapolis hospital and was rushed into surgery, but doctors quickly closed her up once they realized what she had.

They sent her to Baltimore’s Shock Trauma Center, a state-of-the-art hospital specializing in the most dire, life-threatening cases. It is part of the University of Maryland Medical Center where Wilson worked as a pediatric emergency nurse.

“I remember vividly” how sick she was, said Dr. Thomas Scalea, Shock Trauma’s physician-in-chief. “Some people don’t live. Sometimes you do the best you can do and the disease is bigger than the medical care. The fact that she was a nurse at our place, that she had just had a baby, all of that made it very, very hard.”

“I can’t tell you the number of times I operated on her; probably 40, 50 times,” Scalea said. “Every time we went back, we just hadn’t gotten control.”

Once Wilson was stable, the doctors gathered her family to wake her and break the news.

Wilson remembers peering under her hospital gown and seeing what looked like yellow Saran Wrap over her intestines. Loopy from the painkillers, she thought she was in a sci-fi movie “and that they were turning me into a robot.”

She feared her baby was dead, that it was somehow her fault, and that she was being punished. Her family brought him to see her through a window, but she accused them of borrowing a baby from the hospital. They took pictures of Christopher at home with newspapers showing the current date, like kidnappers do to prove a captive is alive. She remained unconvinced.

Finally, when he was several months old, they put her in isolation gowns and brought him to a conference room. A tiny arm poked out of his blanket.

“I have a freckle on my right arm and he has one on his left in the same spot. I remembered that,” Wilson said. “That’s when I thought, ‘OK, he’s here, he’s real. I’ve got to get back home to him, to get better now.’”

But the germs had only just begun to ravage her.

That fall, as she was being discharged from a rehabilitation hospital, she fell ill again. She had developed fistulas — holes in her bowel that let its contents leak out to her skin. She spent the next two years in Shock Trauma or the rehab hospital, trying to heal those open wounds. Her family brought Christopher to visit a couple times a week.

“It was so incredibly hard,” Wilson said. “I wanted to feed him and bathe him and clothe him, and walk him when he cried. I worked in the pediatric emergency room for 11 years. I had waited all my life to do this for my own child, to take care of him, and I couldn’t.”

Christopher’s first birthday party was in the rehab hospital. For his second, Wilson was in a medically induced coma and didn’t even see him. The little boy took it all in stride and never seemed afraid, said Lori Walden-Vetters, another nurse and family friend.

“He didn’t know any different. She was his mother, and she was always in the hospital. For all he knew, that’s how everybody’s mother was,” Walden-Vetters said.

For Wilson, though, life was bleak.

“I was in pain all the time” and nauseated from the pain medicine, Wilson said.

She found comfort from Reiki, acupuncture and guided visual imagery — alternative therapies that she said gave her a sense of control when she was so helpless.

But her health worsened. By December 2006, only inches remained of her small intestine and she developed liver problems. The only solution was risky: a small bowel transplant.

“I remember taking the dressing off . All you see is bowel with holes in it, like a bunch of worms coming out of your abdominal wall,” he said. “It was pretty bad.”

The transplant came on Dec. 16, 2007. Doctors wound up transplanting a large intestine, too, because the damage was so extensive, Wilson said. A month later, she devoured her first meal since May 2005: lasagna, zucchini, salad and cake.

“I loved that salad. I shared it with Christopher. It was so amazing when he came into that room and saw me eating,” she said. “It was amazing to actually be able to chew something and to have diff erent flavors in your mouth.”

But there were more setbacks before Wilson went home for good at the end of January 2008. She’s been hospitalized a few times since then to make sure fevers were not a sign of organ rejection.

She has had surgeries to graft skin and to connect the transplanted bowel to what remains of her colon so she would no longer need to wear a bag to collect waste. The last of these operations, everyone hopes, was in February.

Wilson estimates that her care cost around $5 million, paid at first by the couple’s insurance plans and then by Medicaid, Medicare and Social Security disability.

She must take immunesuppressing drugs for the rest of her life. Her belly is a crazy quilt of scars that her son loves to fling his arms around. He challenges her to Star Wars light saber duels. He begs her to take him to his favorite park, where she threw the ultimate Star Wars-themed party for his fifth birthday in April.

“My life now is pretty normal. I am enjoying spending every moment I can at home with my son,” Wilson said.

She has a bold goal: to return to work, possibly to the hospital where she went from nurse to patient and, hopefully, to nurse again.

“I would like to be able to help someone else who has gone through this.”