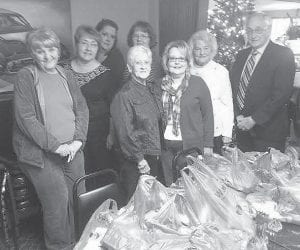 At their December meeting, members of the Letcher County Retired Teachers Association (LCTRA) bagged school supplies to be delivered to elementary schools in Letcher County. The supplies were made possible by a matching grant from AARP, the Kentucky Retired Teachers Association and LCTRA, along with a gift certificate from Walmart. Pictured are (left to right) Joyce Whitaker, Marcia Caudill, Bonita Pigman, Juanita Banks, Margaret Whitaker, Mahala Frazier, Gladys Campbell and Elwood Cornett.

“There are six things doth the Lord hate: yea, seven are an abomination unto him: and he that soweth discord among brethren.” Proverbs 6:16-19

A nice peaceful calm has settled over the ECCO facility as the Christmas season comes to a close. Another year and by the grace of God, we’ve fulfilled and completed our many Christmas projects. This past week the volunteers have enjoyed a relaxing time of laughter and Christian fellowship as we share simple lunches of grilled ham and cheese sandwiches. Looking around I see faces I miss, Tony who has gone to be with the Lord, Ray who moved to Harlan County and Maxine who spends much of her time in Tennessee. But again I see those who’ve been with ECCO for years along with a couple of new ones. One thing we can know for sure about this thing called life, it’s ever changing.

For all you dog lovers I’d like to share an interesting story that is especially fitting for this time of the year. A few days ago early one morning stepping on the porch at ECCO, I was greeted by the sweetest little black dog with a single white paw. He had a collar with the nametag Rascal and a cell phone number. I tried calling the number but got that it was no longer in service. Rascal had such a gentle and sweet temperament every dog lover coming to ECCO was quite taken with him. I knew that his owner had taken time to train him because when he wanted to follow me home that evening, I said, “Stay, Rascal” and he returned to the porch and sit down.

The next day Sharman came by and instantly fell in love with Rascal and planned to take him home with her, but was going out of town and couldn’t at the time. A short time later she called saying there were flyers inquiring about Rascal around town, and she called the number, which was different from his tag, and told the owner where to find him. A few minutes later the owner called, and tearfully told me that was her Rascal.

I understood her to say she lived in Gate City and asked me would I mind keeping him until she could come for him. Of course I said yes.

Now this is where it gets interesting. Within the hour a man walked through the door, asking if I had a black dog, to which I replied, “Sure do.” Suddenly he stopped cold, asking “ Brenda, do you know me?” And with startling realization, I exclaimed, “ Bobby Burke,” my first cousin, Uncle Otis’s boy on Daddy’s side, whom I hadn’t seen in years. The dog was a gift from him to his granddaughter.

We were happy to see each other and Rascal was beside himself to see Bobby as he wiggled all over and continually pawed him with that one white paw. The whole scene brought a lump to my throat. One thing I gotta say about old Rascal, he knew he’d get help by coming to kinfolk.

With that I’ll close with this thought for the day. The quickest way to stop gossip is for everybody to shut up.

Community Bulletin Board: Sunday evening worship service at ECCO’s Chapel at 5: 00, all welcome. Cumberland River Volunteer Fire Department meets the second Sunday of each month at 11 a.m. at the Partridge Station, volunteers welcome. Partridge Lions Club meets the first and third Thursday of each month at 6:30 p.m. at the Ovenfork Senior Citizens Center , come and bring a guest. Bible study at ECCO each Monday evening at 7:00 with teacher John Doug Hays, all welcome.

Also lift up in prayer those struggling with alcohol and drug addiction, may they be delivered, our military troops around the world, our President and the leaders of our country, the United States, all the children hurt by war, and the ministry of ECCO.

Until next time from the folks at ECCO, God bless.