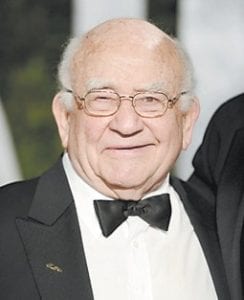 Ed Asner, a busy actor at age 81, waves away any comparison to Betty White, Hollywood’s 89-yearold champion of the work ethic.

“She’s not the female me. She’s the big cheese. She certainly is the mark I shoot for,” Asner said.

While White has shaken up her image by hosting “Saturday Night Live” and with the TV Land sitcom “Hot in Cleveland” — “showing them all that jazz that she’s got stored up in her,” as Asner puts it — he says audiences are used to “ the usual crab element I’m known for.”

It’s true that Asner is in full and familiar grouchy glory in his latest role, a grocery store worker who acts as adviser and foil to a single mom, Carli, in CMT’s “Working Class,” starring Melissa Peterman. It’s territory he plowed in the animated movie “ Up,” and in TV’s “ The Mary Tyler Moore Show” and spinoff “ Lou Grant.”

But he does it so awfully well, on screen and in life.

Mention that he’s lucky to work when older people can struggle for employment in any field, and he’s off and running.

“It sucks, doesn’t it?” he said. “I can understand how they don’t want to see an old fart in front of the camera, but when they start ruling out directors and cinematographers and producers and writers because they’re too old, there’s something wrong in the world.”

Asner is more than contented, however, to work with Peterman, whose credits include CW’s “ Reba.” Reba McEntire popped up in the third “Working Class” episode on Feb. 4 (it repeats this Friday, Feb. 11, at 9:30 p.m.), playing “sugar mama” to Carli’s ex-husband (John Schneider).

“She is ideal. I haven’t worked with anybody as noble, generous and sharp since Mary Tyler Moore,” he said of Peterman.