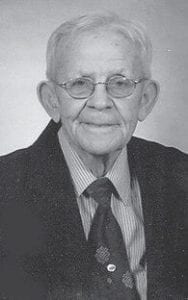 Born at Linefork, he was a son of the late John Davis Huff and Nancy Catherine Blair.

He was a retired inspector after 20 years at Cummins Engine Company in Columbus, Ind. He had previously worked for Jefferson Proving Grounds in Jefferson County, Ind., and Ohio Glass Works in Toledo, Ohio, and was a log truck driver in Kentucky.

Huff was a member of the First Baptist Church in North Vernon and the Diesel Workers Union. He attended Kingdom Come School and was a U.S. Air Force veteran of World War II. He enjoyed being outdoors, hunting and fishing.

Funeral services were held March 7 at the First Baptist Church in North Vernon. Burial was in the Vernon Cemetery.