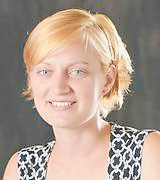 Samantha Swindler, the publisher and editor of the weekly Headlight Herald in Tillamook, Oregon, is the winner of the 2010 Tom and Pat Gish Award for courage, integrity and tenacity in rural journalism.

The Institute for Rural Journalism and Community Issues, based in the School of Journalism and Telecommunications at the University of Kentucky, gives the award in honor of the couple who published The Mountain Eagle for more than 50 years. Tom Gish, who died in 2008, and his wife Pat were the first recipients of the award.

Like the Gishes, Samantha Swindler is being recognized largely for her courage, integrity and tenacity in Eastern Kentucky, but also in Texas, where she began her newspaper career less than seven years ago. She has been in Oregon since July 2010.

The award will be presented to Swindler on April 1, at the spring symposium of the Oregon Newspaper Publishers Association in Albany, Ore.

As managing editor of the daily Times-Tribune of Corbin, Ky., circulation 6,000, Swindler spearheaded an investigation of the Whitley County sheriff that helped lead to his defeat for re-election and his subsequent indictment on 18 charges of abuse of public trust and three counts of tampering with physical evidence.

Swindler and her reporter, Adam Sulfridge, received repeated warnings about their safety as they revealed irregularities in how Sheriff Lawrence Hodge accounted for missing guns his officers had seized, problems with his alleged payments to informants, his failure to present cases against anyone arrested for felony drug violations, failure to send seized drugs to the state crime laboratory, and his officers’ repeated failure to testify, resulting in dismissal of serious drug charges.

“She did not let anyone scare her off the story or push her around,” said William Ketter, who worked with Swindler as senior vice president/ news for Community Newspaper Holdings, which owns the Times-Tribune.

The prosecutor, Commonwealth’s Attorney Allen Trimble, told the Institute for Rural Journalism and Community Issues that the paper’s “very persistent” reporting “was a very signifi cant influence on me.”

Swindler recounts her experience in the latest edition of Nieman Reports, published by the Nieman Foundation for Journalism at Harvard University.

“There is a great need for good investigative journalism in rural America,” she writes. “ Young reporters tend to think they need a byline from The New York Times to make a difference in the world. If they really want to have an impact, get a job with a community paper and start asking the tough questions that no one ever asked before.”

The investigation of the sheriff was the capstone to Swindler’s four years in Corbin, in which she held local officials accountable on a wide front, revealing that the county was improperly using a tourism tax to fund an airport and that city officials spent $20,000 on tickets to a country-music concert for city employees and their friends.

When Swindler was managing editor of the Jacksonville ( Tex.) Daily Progress, the paper won a Freedom of Information Award from the Texas Associated Press Managing Editors for coverage of city police corruption. The city manager was fired after Swindler, then a reporter, found he was illegally burning condemned houses.

A native of Metairie, La., Swindler is a 2002 graduate in communication from Boston University.

“She makes a wonderful example for the rest of us,” said Ben Gish, editor of The Mountain Eagle, son of the couple for whom the award is named and a member of the award selection committee.

“If in the past decade there’s been any other journalist in America, rural or city, who has demonstrated the level of tenacity, courage and integrity Swindler did with that series, then I’d like to meet them,” Gish said. “Unless they were able to walk in her shoes, it would be impossible for a reporter/ editor at a large metropolitan daily to understand the danger Swindler faced while letting Whitley County know its top law enforcement officer was a crook.”

Ketter said, “Never has there been a greater need for perceptive, courageous reporting in smaller communities as big city papers reduce their resources and reach across rural America. That’s why it is so important that journalists such as Samantha Swindler stand their ground, however fraught with risks, as the people’s surrogate, holding public officials accountable.”

The Gish Award has a criterion of tenacity “because our craft has had many courageous rural journalists whose achievements have been meteoric, ending in burnout,” said Al Cross, director of the Institute for Rural Journalism and Community Issues. “It’s very diffi cult to show courage over a long period, as Tom and Pat did. So, I never really anticipated that the award might go to someone who hasn’t turned 30. But in her short career, Samantha Swindler has demonstrated the tenacity, courage and integrity that we had in mind when we created the award.”

Besides Tom and Pat Gish, other winners of the award have been the Ezzell family, publishers of The Canadian ( Tex.) Record, in 2007; and former publisher Stanley Dearman and Publisher Jim Prince of The Neshoba Democrat of Philadelphia, Miss., in 2008. No award was presented for 2009.