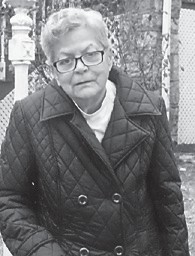 Born in Seco to the late Otto and Martha Sexton Woody, she was the widow of Eddie Holbrook.

She was a grandmother of the late Adam Holbrook, and was also preceded in death by a great-grandchild, Austin Stidham

Memorial services were held October 27 at Letcher Funeral Home in Whitesburg. Burial was in the Green Acres Cemetery at Ermine.