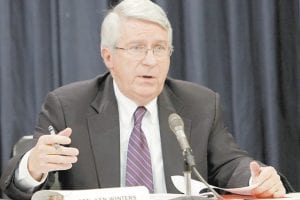 Winters, R-Murray, didn’t rule out tacking on a provision to create charter schools, which would get state money but be exempted from many of the regulations that apply to other public schools.

“We’ve yet to make that decision,” he told reporters after a Senate Education Committee meeting Tuesday afternoon.

Kentucky Education Association President Sharron Oxendine said her organization, which represents 32,000 teachers, hasn’t taken a position on the legislation. However, Oxendine said, if the Senate includes a provision calling for charter schools, the organization would object.

Lawmakers have been rushing to get the legislation through the House and Senate and signed by Gov. Steve Beshear this week so that the state can meet a Jan. 19 deadline for applying for up to $200 million in federal school improvement money over four years. The money, part of last year’s federal stimulus package, is intended to improve low-performing schools.

Winters said he expects a floor vote in the Senate on Wednesday. The House passed its version of the measure 96-0 on Monday.

States across the country are competing for the money. Recipients will be chosen on the strength of their applications, and some lawmakers believe Kentucky would improve its chances by including a charter school provision.

Tapping into the money is especially important to Kentucky because of budget shortfalls that could trigger spending cuts in the upcoming two-year budget cycle.

Education Commissioner Terry Holliday said low-performing schools would be in line to receive federal help, though administrators and teachers could lose their jobs in the process.

“I may be embarrassed to be one of these schools, but I sure would want the money,” Holliday told lawmakers.

The legislation is House Bill 176.