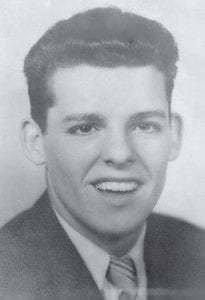 Born at McRoberts, he was a son of James and Beulah Satterfield Vinson. He was also preceeded in death by three sisters, Catherine, Ida Mary, and Dorothy, and two brothers, Charles and Donald.

Vinson was an World War II Army veteran, and served nine months as a sergeant with the 97th Infantry Division in France and Germany and in the Western Pacific Theater. He was a member of American Legion Post #13 in East Millinocket.

He worked at the Great Northern Paper Company in East Millinocket for 17 years in quality control and the maintenance department, and was an active member of Machinists Local #362. In 1970, he was elected to the position of business representative to District #99 of the International Association of Machinists where he worked until his retirement in 1986. He also served as a member of the Maine Vocational Education Advisory Board. He was a member of the First Congregational Church of East Millinocket and served on various boards and committees over the years.