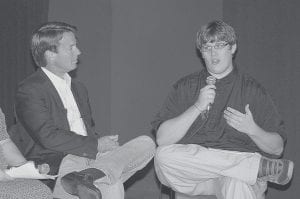 A day after ending an eightstate tour which brought him to Letcher County, Democrat John Edwards last week challenged President Bush to explain policies that Edwards said favor the wealthy.

“I want George Bush to come with me and see these people, look them in the eye and tell them why he’s turned his back on them,” Edwards said after releasing a letter he sent to Bush inviting him to join him in addressing poverty. Edwards claims 5 million Americans have fallen into poverty during Bush’s presidency.

“He’s done more than turn his back on them,” Edwards said. “He’s made their lives harder.”

In his letter to Bush, Edwards, a former North Carolina senator, argued that combating poverty is essential but has been largely ignored throughout his presidency. Edwards said he made the threeday trip to bring attention to the issue.

“I did it to try to help the rest of the country hear the voices of people who are often forgotten, people living in poverty and on the losing end of economic unfairness,” said Edwards.

Edwards said none of his Democratic rivals has devoted as much attention to fighting poverty.

“On the issue of poverty, it’s clear I have the most substantive and comprehensive plan,” said Edwards.

During the forum, 19-year-old Brittany Hunsaker told Edwards she can’t afford health care because she is going to college and doesn’t qualify for government entitlements.

“I can’t go to the doctor because I’m a college student, I don’t have a baby and I don’t have any money,” she said. “It seems like the priorities are very mixed up, and it seems unfair to me.”

“It just shouldn’t be in the United States of America that we have people like you that can’t see a doctors,” Edwards responded.

Edwards then told the audience at Appalshop about his earlier stop in Wise, Va., where he met Jenkins native James Lowe, who told him that his cleft palate kept him from talking for five decades until a dentist volunteered to perform a $3,000 orthodontic procedure for free last year.

“When will we say we’re not going to tolerate this anymore?” Edwards asked.

Edwards said America “desperately needs a president who will stand up and do the things necessary with some backbone for the regular working people.”

Edwards later traveled to Floyd County, where he spoke at the same place where Robert F. Kennedy gave his anti-poverty speech nearly 40 years ago.

“What are you willing to do?” Edwards said at the Floyd County Courthouse in Prestonsburg. “How much do you love this country?”

Though he concluded his journey in the footsteps of Kennedy, Edwards said he wasn’t trying to mimic his “political hero.”

“I don’t deserve to be compared to Bobby Kennedy,” Edwards told the crowd that spilled across the courthouse lawn. He added, “I want America to remember what he did decades ago. I want you to join us to end the work Bobby Kennedy started.”

Edwards’ tour began July 15 in New Orleans’ Lower Ninth Ward. He visited sites in Mississippi, Arkansas, Tennessee, Ohio and Pennsylvania, before wrapping up with stops in Appalachia on July 18.