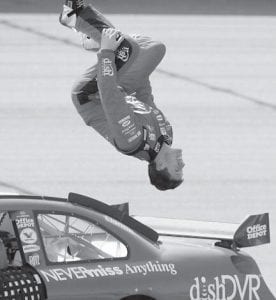 Carl Edwards did a back flip off of his car after winning a rain delayed NASCAR Sprint Cup Auto Club 500 at the Auto Club Speedway in Fontana, Calif., on Monday. (AP Photo)

For Carl Edwards, it’s a signal. At least one NASCAR Sprint Cup team is ready to take on Hendrick Motorsports.

Edwards won the rain-delayed Auto Club 500 on Monday, finishing ahead of Jimmie Johnson and Jeff Gordon. In a race that resumed with the 88th of 250 laps, Edwards assumed the lead for good with 13 laps left.

“I hope it’s an indication we’ve caught up with them,” Edwards said after the eighth victory of his career. “They still were second and third and they were the guys to beat today. I hope this is a sign we’re up to their standards, to their level.”

Johnson took the green flag for the final restart in the lead with 26 laps left, but Edwards surged from third. He then showed fine form on his traditional victory backflip after capturing the checkered flag in a race that ended under caution when Dale Jarrett spun on the final lap.

Edwards had it all but wrapped up at that point, driving his Roush Fenway No. 99 Ford to a lead of more than four seconds over Johnson. It was his first victory at Fontana but his seventh top-10 finish in eight starts at the track formerly known as California Speedway.

Gordon, who dominated Sunday’s rain-interrupted racing, finished third. He was followed by Kyle Busch and Roush’s Matt Kenseth, who had won the two previous February races at this track. Another Roush driver, Greg Biffle, won this event in 2005.

A year ago, Johnson and Gordon ended 1-2 in the season points. Johnson won his second straight Cup title and the team rolled up 18 victories in 36 races. The Hendrick contingent also won nine of the 16 races in which NASCAR’s new Car of Tomorrow was raced.

The CoT is being used for the entire Sprint Cup schedule in 2008 and its debut on Auto Club Speedway’s 2-mile oval was a triumph for Edwards and Roush Fenway Racing.

“I know that last year I would not have traded my car in for one of theirs at any of the CoT races towards the end of the year,” Edwards said. “I thought we had the best car. Everyone knows, all the drivers know for sure, it’s what you’re sitting in a lot of the times that makes a tiny little difference and I’m proud to be driving this car.”

Team co-owner Jack Roush dragged his feet testing the bigger, boxier CoT a year ago. But Roush said that changed last May when he realized other teams were getting too far ahead.

“We went to Bristol (for the first CoT race) and we were 2,000 miles behind what they did in testing on non-sanctioned NASCAR tracks,” Roush said. “That was my fault.”

He said his team made “a Herculean effort” from that point on to develop the CoT.

On Monday, Edwards went into the final round of pit stops under caution on lap 221 while leading. He came out behind Johnson, Gordon and Roush Fenway teammate Jamie McMurray.

He quickly passed McMurray after the green flag waved for the start of lap 225 and set out after the leaders, passing Gordon for second on lap 233 and moving alongside Johnson’s No. 48 Chevrolet on lap 236.

They stayed side-by-side for almost two laps before Edwards nosed ahead and began to pull away.

“I told my guys, ‘We got ’em right where we want ’em.’ This is what we prepared for,” Edwards said. “I enjoy that kind of stuff.”

“Jimmie is always fun to race with,” he added. “He’s a true racer.”

Gordon’s engine blew seconds before the last of 12 caution flags in the race froze the field.

“Carl Edwards was in another league.,” he said. “We’ve got some work to do to catch those guys.”

Gordon, a four-time Cup champion, and Johnson got off to a tough start last week at Daytona, finishing 39th and 27th, respectively.

“It’s a good rebound from Daytona and we’ll roll on,” said Johnson, who won 10 races last season. “I was too loose off the corners to do anything with Carl.”

About 25,000 fans, far short of the approximate 120,000 capacity, were on hand Monday, with the sun peeking out from high clouds and temperatures moving into the high 60s.

The drivers spent most of Sunday waiting through rain, track drying and attempts to stop water seeping through seams of the track. The race finally began about 2¬Ù hours late, followed by a rain delay of just more than an hour and then a five-hour wait after a downpour. NASCAR and track officials finally gave up after 11 p.m. and postponed the conclusion until Monday.