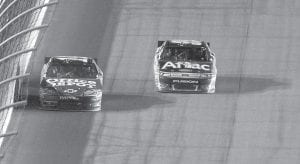 Tony Stewart, left, led Carl Edwards, right, during the NASCAR Sprint Cup Series auto race at Homestead-Miami Speedway on Sunday. Stewart won the race and the season title, a turn of events that Edwards accepted with a large amount of class. (AP Photo)

Carl Edwards did everything right in his quest to win NASCAR’s championship.

He was strong and steady for 10 consecutive weeks, he salvaged solid finishes on the days his Roush Fenway Racing team struggled, and he stood steely in the path of Tony Stewart’s unyielding verbal assault.

In almost any other year — and all five in the Jimmie Johnson reign — he’d have woken up Monday a NASCAR champion.

Not this year, though. And there’s nothing he could have done differently to change the outcome.

Edwards went round-for-round with Stewart in what might be the greatest fight for the title in NASCAR history and lost. The two finished tied in the final Sprint Cup Series points standings — a first in NASCAR history — and Stewart took the tiebreaker based on his five victories to Edwards’ one.

So despite winning the pole, leading the most laps in Sunday’s season finale at Homestead- Miami Speedway and finishing second to Stewart, Edwards went home the bridesmaid in what many believe to be the most gripping championship-deciding race ever.

“We knew we could come into this thing and we knew that of all of the circumstances that could happen, this one was the least probable,” Edwards said. “I mean, for us to finish like that, tied, fighting for the win. That is the least probable outcome.”

But who could have known that a version of Stewart not seen in these parts for years would clog his path?

See, Smoke and his skills, his ability to do anything he wants in a race car, his fearlessness and reckless abandon, it’s almost legendary. People talk of that Stewart with awe and revere and dole out the highest of compliments when they describe him, simply, as “a racer.”

And, yeah, the reputation precedes him. The reality, though, was Stewart hadn’t driven up to his reputation, at least not in NASCAR, for some time — and that was evident at the start of this season when he lost the Daytona 500 on the final restart.

He slogged through the season, flirting with wins early, only to lose out by silly mistakes. Then his Stewart-Haas Racing team lost direction, and Stewart all but abandoned any hope of being a major player in the championship race.

Something changed in the last six weeks, though, and when Stewart got his eyes set on a third championship, nothing was getting in his way.

“When someone wants to win like that, they aren’t going to give up,” A.J. Foyt, Stewart’s childhood idol, told The Associated Press on Monday.

So that’s how they got to late Sunday night, when a disappointed Edwards sat silently in Homestead’s media center watching Stewart’s championship celebration on a bank of televisions. He’d shaken Stewart’s hand, and he’d consoled crew chief Bob Osborne, who had to be devastated by the final outcome.

But Edwards himself? He didn’t pout. He didn’t scowl. And if he had himself a good cry, he most certainly didn’t do it in public.

There are those who say Edwards is so very image-conscious that he must been less than genuine. But his conduct in the hours after Sunday’s race showed just how to act with class and sportsmanship in the face of defeat.

“I told myself, I told my family, that the one thing I’m going to do is I’m going to walk back to that motorhome, win, lose or draw, and I’m going to be a good example for my kids and work hard and go be better next season,” Edwards said.

Edwards knows he can’t dwell on the Chase, and even if he did second-guess the last 10 weeks, he’d be hard-pressed to find a single thing he could have done differently. Edwards talked of taking his family to the beach on Monday, of helping Roush- Fenway celebrate Ricky Stenhouse Jr.’s Nationwide title, of getting back into the gym and starting the preparations for 2012, when he’ll try again to win his first Cup title.

“At least we know that we can compete with any of these people,” Edwards said. “We can compete with a three-time champion winning half of the Chase races. We can still score as many points as them. That’s a big deal. And I know that there are a lot of tests in life and I think that the last three or four weeks have been a huge test for me and for my team mentally.

“For us to keep our confidence up, to keep our cool, and to go out and perform and do our jobs, I’m really proud and believe next year we’ll do even better.”