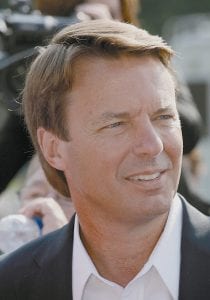 Former Senator John Edwards is photographed before entering Appalshop in Whitesburg to take part in a youth forum concerning drug abuse and unemployment.

Former North Carolina Senator John Edwards on July 18 became the first presidential candidate in more than 40 years to visit southeastern Kentucky and southwestern Virginia when he made stops at Appalshop in Whitesburg, the Floyd County Courthouse in Prestonsburg and Wise County Fairgrounds in Wise as part of his three-day “Road to One America” tour. Photographer Lonnie Webster of Blowing Rock, N.C., was present for each stop Edwards made in the region. 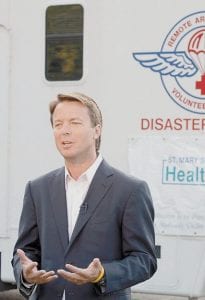 Edwards speaks to a crowd in Wise, Va., while standing in front of the St. Mary’s Health Wagon. 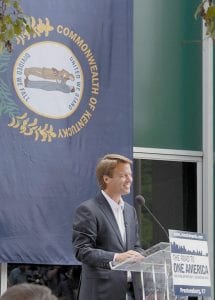 The Kentucky state flag served as part of the backdrop as Edwards delivered a speech in front of the Floyd County Courthouse in Prestonsburg. All photos by Lonnie Webster 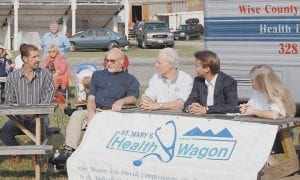 In Wise, Va., Edwards listened as James Lowe of Jenkins ( far left) spoke of the help he received through the Remote Area Medical outreach program, which sets up at the Wise County Fairgrounds each summer to provide free medical and dental care to persons who are underinsured or unemployed. Seated next to Edwards in the middle of the photo is Virginia Dental Association representative Dr. Terry Dickinson, who coordinates dental services for the outreach program. Seated far right is Teresa Gardner, executive director of the St. Mary’s Health Wagon, which also provides health care services to those in need. 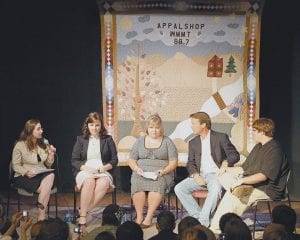 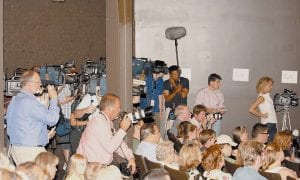 Members of the national media, including representatives of CNN, The New York Times, NBC News, and Time magazine followed Edwards during the tour. At left are members of the media watching the events at Appalshop. The photo at bottom was taken in Wise. 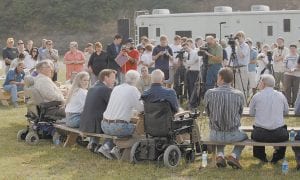