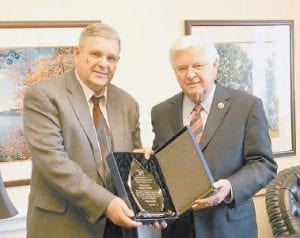 L.M. “Mike” Caudill says he couldn’t have picked a better time to be in our nation’s capital to present an award to U.S. Representative Harold “Hal” Rogers.

“I was honored to have been chosen by NACHC to present the award and was equally honored to be able to present it to someone so deserving as Congressman Rogers,” said Caudill.

At the time the award was presented, Rogers, who chairs the powerful House Appropriations Committee, had just come off the House floor where he had orchestrated the successful passing of a bipartisan spending plan for the rest of the current fiscal year that eases the bite of $85 billion in automatic spending cuts.

“Prior to the vote we had been told by HRSA (U.S. Health Resources and Services Administration) to expect a five-percent across the board cut this year,” said Caudill. “By getting the resolution passed Hal made sure that the 1,200 community health centers with over 9,000 delivery sites across the country had their funding preserved.”

According to Caudill, community health centers serve more than 22 million Americans each year.

“This is especially important to Kentucky where 23 different community health centers serve over 300,000 patients over a million times each year,” he said.

“With our five clinics and 13 school based clinics, we are uniquely positioned to serve our people with quality, affordable health care,” said Caudill. “With the current hard economic times we are proud to be able to concentrate on our laid off miners and other citizens in need acute and chronic care regardless of their ability to pay.”