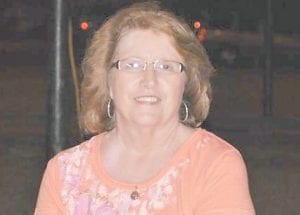 Eileen Williams Sanders of Jenkins, has been named the Jenkins Outstanding Citizen and will be honored by the Jenkins Homecoming Festival Committee for her many years of service to the community. The presentation of the award will take place on the stage in Jenkins City Park at 12:30 p.m. on Saturday, August 24. She and other honorees will also ride in the parade, which begins at 10 a.m. on Main Street in Jenkins.

Sanders was born in Huntingdon, England, in the village of Abbots Ripton near St. Ives. Her father, James Williams, was born in Dorchester, Va., and reared at Flap Gap near Eolia in Letcher County. During World War II, he served as a machinist in the Army Air Corps and was stationed at Alconbury Air Base in England, where he met his future wife, Doris Buddle. Sanders’s brother, John, was also born in England.

When the family came to Kentucky in 1946, they lived at Belcraft near Sandlick where James Williams worked as a coal miner. The family moved to McRoberts in the late 1940s. In addition to her brother, Sanders has five sisters, Evelyn, Catherine, Debbie, Virginia and Doris Jean ‘D.J.’.

After graduating from Jenkins High School in 1963, Sanders attended Midway Junior College where she received an associate degree in education. After attending Pikeville College for a year, she attended the University of Kentucky where she completed a bachelor’s degree in elementary education. She taught second grade at Johnson Elementary School in Lexington for four years, then she and her husband, Ked, returned to McRoberts in 1971, where their son, Kris, was born in 1972. Their son, Stephen, was born in 1978.

In 1987, Sanders returned to education as a teacher’s aide at Burdine Elementary School. Because of her love for teaching, she began taking evening classes through Morehead State University to renew her certification and obtained a Rank II. She began teaching fourth grade in 1989 at Burdine and was a classroom teacher for three years before becoming a librarian at Burdine and McRoberts schools. When she retired in 2005, she was district librarian/media specialist for the Jenkins Schools.

She and her husband, Ked, have lived in Jenkins since 1974. Their son, Kris, lives at home, and Stephen lives in Richmond, Va., with his wife, Kasie, and their three daughters, Madison, Olivia and Reece.