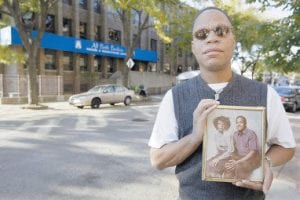 Russell Smith holds a photo of his stepfather, Ivory Jackson, and half-sister, Anita Jackson, outside a nursing home n Chicago. Ivory Jackson, who suffered from Alzheimer’s, was killed by his mentally ill roommate after being smashed in the face with a clock radio as he lay in his nursing home bed. (AP Photo)

Ivory Jackson had Alzheimer’s, but that wasn’t what killed him. At 77, he was smashed in the face with a clock radio as he lay in his nursing home bed.

Jackson’s roommate —a mentally ill man nearly 30 years younger —was arrested and charged with the killing. Police found him sitting next to the nurse’s station, blood on his hands, clothes and shoes. Inside their room, the ceiling was spattered with blood.

“Why didn’t they do what they needed to do to protect my dad?” wondered Jackson’s stepson, Russell Smith.

Over the past several years, nursing homes have become dumping grounds for young and middle-age people with mental illness, according to Associated Press interviews and an analysis of data from all 50 states. And that has proved a prescription for violence, as Jackson’s case and others across the country illustrate.

Younger, stronger residents with schizophrenia, depression or bipolar disorder are living beside frail senior citizens, and sometimes taking their rage out on them.

“Sadly, we’re seeing the tragic results of the failure of federal and state governments to provide appropriate treatment and housing for those with mental illnesses and to provide a safe environment for the frail elderly,” said Janet Wells, director of public policy for the National Citizens’ Coalition for Nursing Home Reform.

Numbers obtained through the Freedom of Information Act and prepared exclusively for the AP by the Centers for Medicare and Medicaid Services show nearly 125,000 young and middle-aged adults with serious mental illness lived in U.S. nursing homes last year.

That was a 41 percent increase from 2002, when nursing homes housed nearly 89,000 mentally ill people ages 22 to 64. Most states saw increases, with Utah, Nevada, Missouri, Alabama and Texas showing the steepest climbs.

In Kansas, the number of younger mentally ill patients in nursing homes increased 30 percent from 2002 to more than 1,600 in 2008. It ranked 38th in the nation for its growth rate.

Younger mentally ill people now make up more than 9 percent of the nation’s nearly 1.4 million nursing home residents, up from 6 percent in 2002.

Several forces are behind the trend nationwide, among them: the closing of state mental institutions and a shortage of hospital psychiatric beds. Also, nursing homes have beds to fill because today’s elderly are healthier than the generation before them and are more independent and more likely to stay in their homes.

No government agency keeps count of killings or serious assaults committed by the mentally ill against the elderly in nursing homes. But a number of tragic cases have occurred:

— In 2003, a 23-year-old woman in Connecticut was charged with starting a fire that killed 16 fellow patients at her Hartford nursing home. A court guardian said Leslie Andino suffered from multiple sclerosis, dementia and depression. She was found incompetent to stand trial and committed to a mental institution.

— In January, a 21-year-old man diagnosed with bipolar disorder with aggression was charged with raping a 69-year-old fellow patient at their nursing home in Elgin, near Chicago. A state review found that Christopher Shelton was admitted to the nursing home despite a history of violence and was left unsupervised even after he told staff he was sexually frustrated.

Jackson’s roommate was 50 and had a history of aggression and “altered mental status,” according to the state nursing home inspector’s report. Solomon Owasanoye wandered the streets before he came to All Faith Pavilion, a Chicago nursing home, and he yelled, screamed and kicked doors after he got there.

On May 30, 2008, he allegedly picked up a clock radio, apparently while Jackson slept, and beat him into a coma. Exactly what set him off is unclear. Jackson died of his injuries less than a month later. Owasanoye pleaded not guilty to first-degree murder, and after a psychiatric review was ruled unfit to stand trial. He now lives in a state mental hospital.

All Faith Pavilion co-owner Brian Levinson said his staff is trained to deal with aggressive behavior, and he disputed state findings that Owasanoye had a history of aggression. The for-profit nursing home was fined $32,500 for failing to prevent the assault.

Under federal law, nursing homes are barred from admitting a mentally ill patient unless the state has determined that the person needs the high level of care a nursing home can provide. States are responsible for doing the screening. Also, federal law guarantees nursing home residents the right to be free from physical abuse.

Families have sued in hopes of forcing states to change their practices and pressuring nursing homes to prevent assaults. Advocates say many mentally ill people in nursing homes could live in apartments if they got help taking their medication and managing their lives.

The problem has its roots in the 1960s, when deplorable conditions, improved drug treatments and civil rights lawsuits led officials to close many state mental hospitals. As a result, some states have come to rely largely on nursing homes to care for mentally ill people of all ages.

Also, mixing the mentally ill with the elderly makes economic sense for states. As long as a nursing home’s mentally ill population stays under 50 percent, the federal government will help pay for the residents’ care under Medicaid. Otherwise, the home is classified a mental institution, and the government won’t pay.

In Missouri, more than 4,400 younger mentally ill people are living in nursing homes, in part because of a state program that helps the elderly stay in their own homes longer.

Nursing homes “are looking at 60 to 70 percent occupancy, and the statistics tell us they’ve got to be in the 90s to operate successfully,” said Carol Scott, the state long-term care ombudsman for 20 years. “They’re going to take anybody they can.”

“Often they’ll say, ‘I hate it there. I’m angry. I don’t want to be there.’ Sometimes the behavioral issues are the result of being ticked off you’re in a nursing home,” Kurtz said.

Pat Willis of the Center for Prevention of Abuse said she has seen elderly residents terrified by younger, mentally ill residents who scream and yell, day and night. “The senior residents are afraid,” Willis said. “They would prefer to sit in their rooms now and keep the doors shut.”

Nursing home operators say protections against frivolous transfer or discharge keep the homes from throwing out some mentally ill residents.

“Many times, the nursing home’s only option becomes dialing 911,” said Lauren Shaham, a spokeswoman for the American Association of Homes and Services for the Aging.