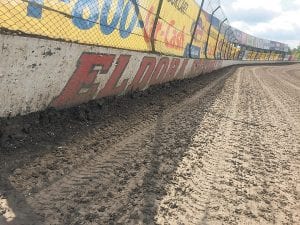 The wet dirt at Eldora Speedway is shown earlier this week in Rossburg, Ohio. Persistent rains and the tightest turnaround in the history of the track has the Eldora Speedway staff in an all-out grind before Wednesday night’s Truck Series race, one of the marquee events on the NASCAR schedule. (AP Photo)

As the sun came up over Eldora Speedway, track general manager Roger Slack carefully debated a contract with the head of the World Racing Group.

Heavy rains had wreaked havoc on the schedule for the 32nd running of the Kings Royal, and the prestigious sprint car race didn’t end until 4:30 a.m. Sunday. But at least 15,000 fans had waited out a pair of thunderous storms, and the historic dirt track was packed when the feature finally began some five hours after its scheduled start.

When track owner Tony Stewart attempted to weave his way through the post-race crowd, he was stopped dozens of times by fans thanking him for ensuring they saw the show to its completion.

But there was zero time for Stewart’s staff to rest. Slack needed to finalize any lingering business with the World of Outlaws, clear the campgrounds and begin prepping for NASCAR’s arrival. Eldora hosts the Truck Series on Wednesday (tonight) in what’s become a marquee event on the NASCAR schedule. This year’s field includes Brad Keselowski, Ty Dillon and Austin Dillon, winner of the inaugural 2013 race.

This year marks the third running of the “Mud Summer Classic” — the only NASCAR event run on dirt — and the preparation time this year is brutal. A change in NASCAR’s scheduling put the event five days after the Kings Royal, Eldora’s second-biggest event of the year that draws 33,000 people.

So when Fox Sports said it needed to begin building its television compound on track property late last week to prepare for the truck race, Slack had to explain the network’s designated compound area was in use as a campground and vending area for Kings Royal.

Add in the headaches created by a month of almost daily rain and Stewart’s staff hasn’t been able to catch a break.

“A lot of this would have worked perfectly if not for the wettest July since 1875,” Slack said. “We’re proud to be considered one of the cleanest speedways anyone ever visits. The paint is always crisp and the grass is always freshly cut and you never see any weeds, and we’ve hardly had time to do that.”

It’s also been a bear of a task to prep the dirt on the halfmile oval. The task is headed by Chad Schmitmeyer, the grandson of track founder Earl Baltes. Sweating under a bright sun earlier this week, the track caretaker didn’t mind the heat.

“Mother Nature has been testy for us,” Schmitmeyer. “All this rain, and back-toback big races has been a challenge for our crew.”

But they wouldn’t change anything as everyone at Eldora wants to continue the legacy of excellence that began in 1954 when the track was opened by Baltes, who died in March at age 93. Stewart, the three-time NASCAR champion, purchased the track from Baltes in 2005 and has made it the crown jewel of his business empire. Eldora is his baby, and persuading NASCAR to give him a national series race has widened the track’s exposure.

“That’s huge for us to get non-traditional fans to come to the track and have a good experience,” said Stewart, who hopes NASCAR fans who make the pilgrimage to his track will be pleased enough to return for some of the regular events.

He stays involved with what’s going on at Eldora, and as he pulled into the track early Monday after the Sprint Cup race in New Hampshire, he immediately tried to inspect the grounds to gauge how damp it was for the campers.

He feels a sense of responsibility to honor Baltes, who personally called Stewart a decade ago and told him he and his wife believed Stewart was the right person to take over the track.

Stewart has pumped at least $1.5 million into the facility in the last year to build a 9,000-square-foot building that will serve as the new infield media center.

That portion will open Tuesday, a day before the truck race. But a state-ofthe art infield care center, rooftop viewing area and concession stand all in the building were functioning for the Kings Royal.

The upgrades also include an HD system that broadcasts the races on a video board — a luxury not found at many dirt tracks — and occasional pay-perview events. The track staff is also able to produce its own highlight packages to feed to web sites and local television.

Because it’s just one piece of Stewart’s portfolio, he relies on Slack and his staff to keep the wheels turning. When he arrives, he knows everything will be just as he likes.

“When it comes to the day-to-day side, it’s fun for me to pull in (to the track). I can pull in and drive through the campground and see people having a good time,” he said. “I’m a race fan, too. If I go there and the show runs smooth, watch a good race, then you see people when they’re leaving, they’re smiling, they’re talking about what they saw, you know, that makes all that worthwhile.