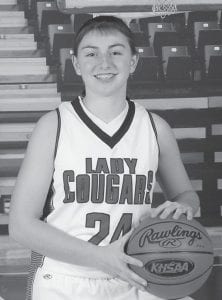 Kelah Eldridge has been chosen to the Lexington Herald-Leader’s Second Team All-State squad. She is a 5’ 6” junior guard for the Letcher County Central Lady Cougars, and has been playing on the team since her seventh-grade season.

Eldridge averaged 17.5 points per game this past season in helping lead the Lady Cougars to a 24-6 record and a Top 25 ranking in the state most of the year. She also averaged four rebounds, three assists and nearly two steals per game.

Eldridge is the all-time career scoring leader at Letcher Central with 1,574 career points, the alltime leading three-point shooter, and has the career leading free throw percentage at 77.1.

Although Eldridge missed most of her sophomore season with an injury, her teams have won 126 games and lost only 29 (a winning percentage of 81.3%) while she has played at LCC.